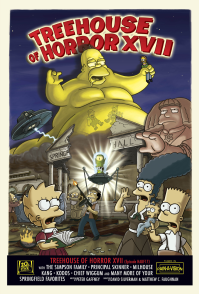 This year's stories see Homer as an Extreme Omnivore thanks to a space marshmallow, Bart using Krusty's Golem to wreak havoc, and a trip back to the 1938 where Springfield suffers an Alien Invasion, but the residents don't believe it as they've already been fooled by Orson Welles' radio broadcast of The War of the Worlds.