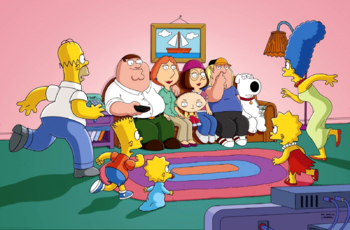 In this crossover episode (one that, for a lot of fans, has been a long time coming), the Griffin family, on the run after Peter publishes an offensive comic strip in the newspaper, finds themselves stranded after their car is stolen and happen upon the town of Springfield, where The Simpsons reside. While there, Homer and Peter Griffin fight over who drinks the best beer (then go to court after discovering that Pawtucket Patriot beer is really a knock-off of Duff), Meg bests Lisa at the saxophone, and Stewie takes a liking to Bart's pranks.

Shhhhh!
And now the show is over now.