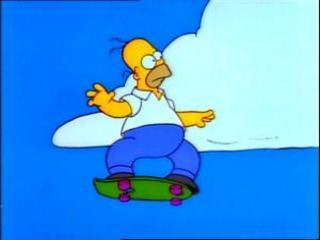 He's not going to make it, you realize.
Advertisement:

The Simpsons family end up attending a monster truck rally one night, which features a performance by renowned daredevil Lance Murdock. Despite Murdock's stunt going hideously wrong, landing him in hospital, Bart declares the man his new hero, and aspires to be a daredevil himself. Bart isn't put off when he's injured during his first attempt, even when he's introduced to a ward of children who have been left badly hurt by attempting daredevil stunts of their own, if anything else it pushes him to succeed.

Bart keeps his stunts fairly tame to start with, using his skateboard to jump over cars, animals and swimming pools, but soon sets his sights on jumping the Springfield Gorge. Lisa is horrified and takes Bart to meet Murdock in hospital, hoping that the man will get Bart to change his mind. Unfortunately Murdock only encourages Bart, and so Lisa has no choice but to give in and tell their parents. However Bart stubbornly ignores anything that Homer has to say, and still heads out to the gorge to complete the stunt.

Homer follows Bart, and determined to show Bart how it feels to watch a family member do something incredibly stupid and dangerous, attempts to perform the stunt himself.