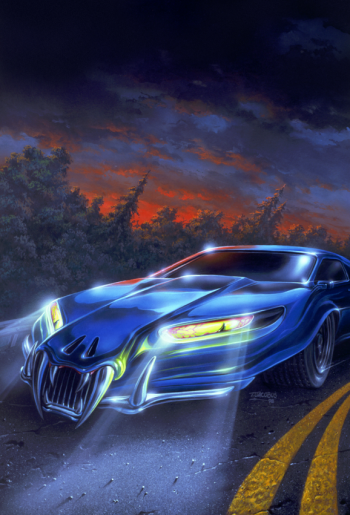 Some people tend to see automobiles as menacing, largely due to their tendency to cause road accidents and deaths, so it's not surprising that they are a recurring motif in horror stories.

The trope comes in two varieties, which may overlap: either the car in question is sentient and malevolent itself, or it belongs to some villain who uses it as a weapon to scare and terrorize others. Such a vehicle would often have nefarious-looking design elements, such as a monster-shaped hood figure or a toy skull and bones on the windshield.

Compare Creepy Stalker Van, Van in Black, Bad Humor Truck, Not My Driver, Harmful to Hitchhikers, and Murder by Remote Control Vehicle. Also compare and contrast The Alleged Car, when the only scary thing about the vehicle is its technical condition. Not to be confused with My Car Hates Me.