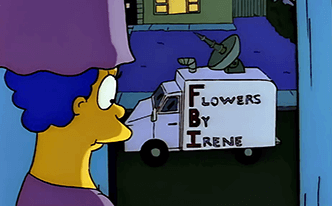 Subtle.
"How do you know they're watching us?"
"Because that pool cleaner's van has been parked out on the street for over four hours. No one's pool is that dirty."
— Sandra Bennet, Heroes
Advertisement:

That large, menacing black van pulling over on the other side of the street the moment you go inside. Maybe you dismissed it as paranoid speculation, just as "The Man" wanted you to but you should know what it means — They are watching you at this very moment from that very car. If Lampshaded there will be a honkin' big radar dish on top.

These vehicles provide a sense of foreboding mystery to the characters they follow and the audience. The vans appear in the background, and are viewed only from the outside. Unlike Spies In a Van, it's common that neither the audience nor The Protagonist ever find out who is in the vans, or what they are doing. Occasionally, both tropes can occur in the same series, if there are competing vans or if the organization operating them determines the heroes are not their enemy and invites them into The Masquerade.

If they're not only watching you but about to kick your ass, then the black van will be replaced by a black sedan or SUV with tinted windows - the GAZ-13 or 14 Chaika and the Chevrolet Suburban, depending on the setting. An important distinction was that in Soviet times and places, black vehicles were entirely reserved for official government fleets while when a black Suburban is seen on American streets in real life, it is assumed to be in soccer-mom use.

See also Black Helicopter. Commonly used in Vehicular Kidnapping, and every parent's worst fear is that one of these might be a Creepy Stalker Van. Despite the trope name, any van of any color can qualify, for that matter it doesn't even have to be a van, just a non-descript nebulous organisation monitering someone in a vehicle. For the curious, the trope title is simply a pun on The Men in Black. Compare Sinister Car.