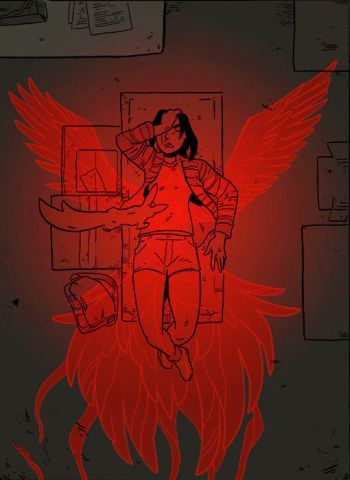 is an Urban Fantasy webcomic about modern-day Egyptian Mythology.

It's the holidays and Edith doesn't feel like doing anything in particular. On her friend and flatmate's insistence, however, she decides to take a trip to the local history museum and is somewhat enjoying herself when she collides with a strange man carrying a canopic jar. Crushed in Edith's hands, the jar is revealed to have a fennec fox inside. Oddly enough, given its place of being, the fennec is alive, and the strange man is very unhappy with the fact that it has been freed.

After narrowly escaping, Edith discovers that the "fennec" is, in fact, god Anubis - or rather Anpu, as he prefers to be called - sealed away by his siblings, great gods of Egypt. With Edith already being entangled in the events, he tasks her with retrieving eight missing parts of his soul - and all the while, Horus' men are after both of them...

Comic updates Mondays and Thursdays. You can start reading it here