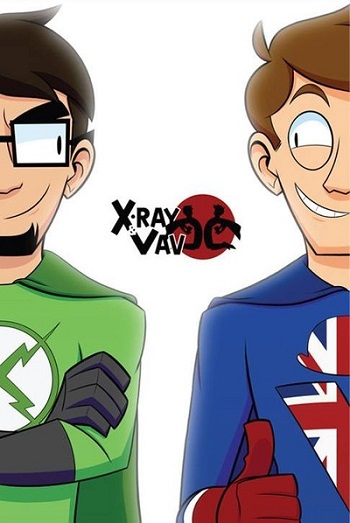 They’re best of buds, they prowl the night;
As super studs, they fight for good;
They’re awesome guys, who kick crime in the butt!
X-Ray and Vaaav!
He's a popular guy, a parkour master,
And might know some Kung fu....
X-RAY AND VAAAV!!!!
He's delightfully British, a hero for justice,
And cares how you feel!
X-Ra-ay and Vav
— Theme Song

X-Ray and Vav is an animated web series created by Rooster Teeth first released on November 27, 2014. The series focuses on the adventures of the titular heroes, who are in turn based on the fictional alter egos of Ray Narvaez Jr and Gavin Free from Achievement Hunter (who also provide their voices).

X-Ray and Vav are your typical heroic duo, who are just trying to make the world a better place - the only problem is that they're failing miserably, unable to do the most menial 'superhero' tasks and getting no respect from the general public. However, after a failed robbery attempt and a run-in with a super-intelligent engineer named Hilda, the duo are given the opportunity to become the greatest superheroes of all time... if they don't destroy the city in the process.

A second season began on 18 July 2015, and you can watch the new intro trailer here

, and the Comic Con trailer here

. Though Season 2 will be longer than Season 1 with ten episodes, Rooster Teeth has opted to split it in half, with the second season of The Strangerhood (one of the many stretch goals for funding Lazer Team) airing between the first and second halves. Despite Narvaez's departure from Rooster Teeth in April that year, he continued to do voice work for his character in the series during Season 2; however, when asked by fans, he said he was "not interested"

in returning to voice the character again should they do a third season.

X-Ray and Vav contains examples of the following: