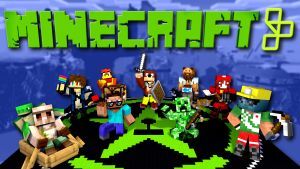 five mennote Geoff Ramsey, Jack Pattillo, Michael Jones, Gavin Free, and Ray Narvaez, Jr. decide to screw around in the then-recently-released Minecraft: Xbox 360 Edition. Only one of the mennote Gavin has ever played Minecraft before. What happens within the 23 minutes of the video they published of their game session can only be described as hilarious chaos.
Advertisement:

Since the release of that episode, Let's Play Minecraft has become one of the most prominent shows of Rooster Teeth's Achievement Hunter division. After a bit of Early Installment Weirdness, the show has settled into a more stable format. In each episode, the main crew of six Achievement Hunters, originally composed of the original five and Ryan Haywood, and later members of the group, compete in some game or challenge within their main world of Achievement City to win possession of the "Tower of Pimps", a column of four gold blocks set atop a single block of obsidian. (Although, Ray used dirt or sponge as a base instead.) Occasionally, some episodes has the group visiting other worlds (often in the PC version of Minecraft) or having another member of the Rooster Teeth staff go along with them.

As of 2018, the Achievement City map has officially been retired due to being too buggy to play any more, and episode 307 marks the founding of Achieveland, later renamed Achievement Cove, to replace it. As of 2021, starting with episode 480, the gang has moved from Achievement Cove to Achievement Island, an empty island on a Rooster Teeth-wide shared server with a communal events island and separate identical islands for Funhaus, Squad Team Force, and RT Animation.

Here on TV Tropes, "Achievement Hunter Minecraft Series" mainly refers to the group's Let's Play Minecraft series,* The work page's name was actually chosen to avoid using the otherwise generic name of the series to refer to only the AH series called Let's Play Minecraft. Besides that, we've already done "<Creator> Minecraft Series" once before to refer to another group's Minecraft videos. but it also refers to two other Achievement Hunter Minecraft shows:

As for the gang in this series, they can be identified by the following skinsnote with derivatives of them for their appearances in Rooster Teeth Animated Adventures and AH Animated as well as the buildings they live in at Downtown Achievement City, Achievement Cove and Achievement Island:

Example of:
I Just Shot Marvin in the Face