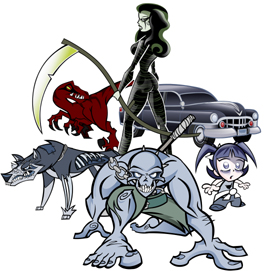 Xombie is a Flash animation and comic book series by James Farr. A 6-year-old girl, Zoe, wakes up on a beach with no memory of how she got there. When she wanders into a cemetery, she discovers why the place is so deserted. Zombies begin rising up from the ground, and gather around her. As the zombies close in, a lone figure enters the scene, and proceeds to summarily OWN the gathering zombies...with a shovel. This lone figure is Dirge, a "variant", a zombie that retains cognitive functions, but no memory of who or what he once was. He decides to escort Zoe through miles of zombie-infested wasteland, accompanied by a zombie police-dog called Cerberus, to a nearby human settlement.

Along the way to the Acropolis, Zoe and Dirge gain new allies: Nephthys, another variant, dressed like a mummy and wielding a scythe with ninja-like ability, and Chimaera, a zombie Velociraptor from the Natural History Museum. They also learn more about the origin of the variants, and meet new enemies, the "Hands of God", Cthulhoid cyborgs/aliens that know a lot about Dirge.

The comic book continues the story, picking up 9 years after the events from the original animations. Disaster has struck the human settlement, and Dirge is the only one who can help. We gain a glimpse of the human settlement's culture, a rigid theocracy, ruled over by a half-mad, babbling priest named Ammon. We find out /much/ more about the zombies and the aliens here, as well as hints about Dirge's former past. He is likely Zoe's father.

In September of 2009, Dreamworks tried to pursue the rights to a live-action movie

, but sadly it never came to fruition due to a Troubled Production, which included a WGA strike. However, in the 20th of Febuary of 2017, Farr announced a sequel to the Xombie series called Xombie: Dead Ahead, which apparently will focus on a grown-up Zoe 10 years after the events of the series (and also 10 years after the final chapter). With it, a website for the new series and its merchandise also came