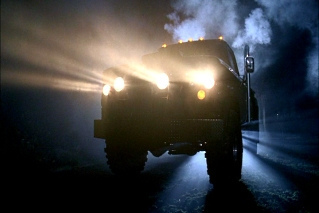 Sam: [over a cellphone] Where are you?
Dean: I'm in the middle of nowhere with a killer truck on my ass!
Advertisement:

Dean receives a call for help from an old friend, Cassie Robinson, and drags Sam to Cape Girardeau, Missouri to investigate the deaths of two black men who had visions of a black truck before they died in unexplained car accidents. It turns out Cassie is Dean's ex-girlfriend who dumped him after he revealed his lifestyle as a hunter. The second victim was her father and the first was one of her father's closest friends.

They find out that 40 years ago several black men disappeared into a big black truck, but Cassie's mother is reluctant to discuss the past. Before they can find out more the first black reporter at the newspaper where Cassie works also dies in an odd car accident on the same road. Sam investigates the past disappearances while Dean investigates any connections to Cassie's family, which leads to Dean and Cassie in bed together. The mayor dies next, looking as if he had been run over. Later the same black truck attacks Cassie's home while she and her mother are home.

Cassie's mother then reveals that she had previously dated a wealthy white man, Cyrus Dorian, but decided to marry Cassie's father, Martin, a black man, which was controversial as it was an interracial relationship. After she breaks up with Cyrus, his personality changes, and the stories about black men disappearing start. On the day they set for the wedding, the church where they were to be married was burnt down, killing children who had gathered for choir practice. But the attacks, continued with the truck coming for Martin, Cassie's father. Martin was tied up and badly beaten, but managed to get free and kill Cyrus. Martin's friends helped him roll the truck with Cyrus' body in it into the swamp, and the mayor—who was a deputy at the time—covered up their actions because he knew that what Cyrus had done would be ignored.

Dean and Sam retrieve the truck and the body from the swamp and burn the body, but then the ghost truck appears. Dean tries to distract the truck by taking off in the Impala, while Sam gives him directions over the phone. Dean follows the directions blindly and as the truck roars towards him, it disappears. Sam reveals he directed Dean to the location of the burnt-down church and the spirit of the truck was destroyed when it passed over hallowed ground. Later Dean says goodbye to Cassie and mentions wanting to see her again, but Cassie says, "You know what? I'm a realist. I don't see much hope for us, Dean."

For this episode = 3 humans and 1 ghost.