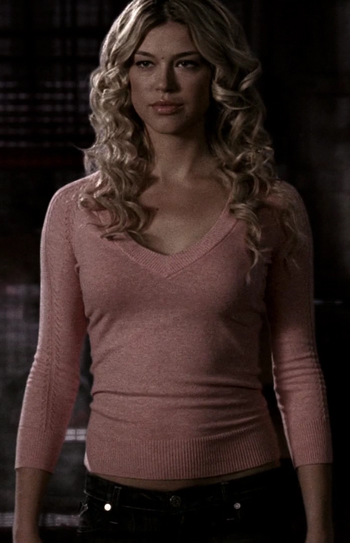 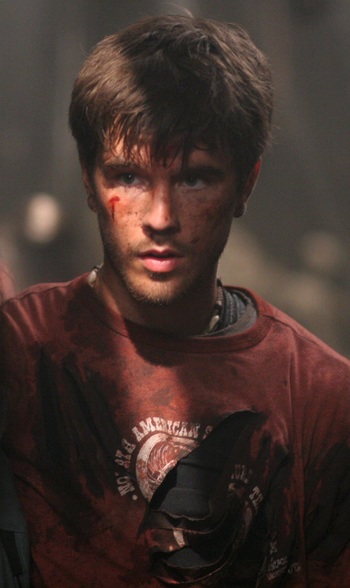 Tommy Collins is Haley and Ben Collins' brother. When on a camping trip with two friends in Black Water Ridge, Colorado, he gets captured by a wendigo, prompting Sam and Dean to join his brother and sister in rescuing him. Tommy first appears in "Wendigo" (S01, E02).

Don't go getting all authoritative on me, I hate it.

Dean met Cassie when he was on a case in Athens, Ohio, and the relationship became serious with him telling her about being a hunter. She couldn't accept what he told her and broke up with him, but later when her father and family friends die after being run off the road by a mysterious black truck, she calls Dean for help suspecting a supernatural cause. After Dean and Sam eliminate the ghostly truck, Dean mentions that they might continue to see each other, but she says she is a realist and does not see a future for them. Appears in "Route 666" (S01, E13). 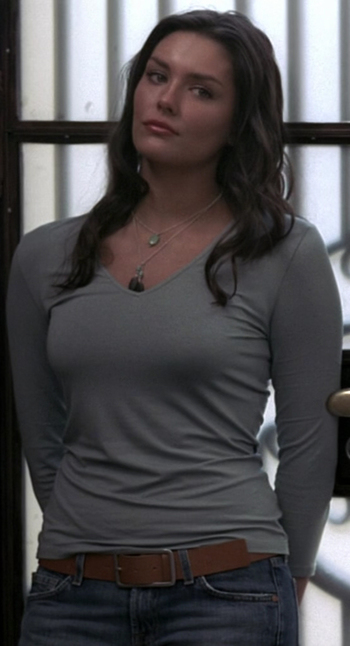 Look, I know losing somebody you love is terrible. Believe me, I know. But when you shut out pain, you shut out everything else, too.

Sarah Blake is the daughter of an auction house owner in New Paltz, New York. Although she and Sam are attracted to each other and Dean tries to play matchmaker, they don't get involved because Sam is afraid of her getting killed like Jessica. Sarah first appears in "Provenance" (S01, E19). 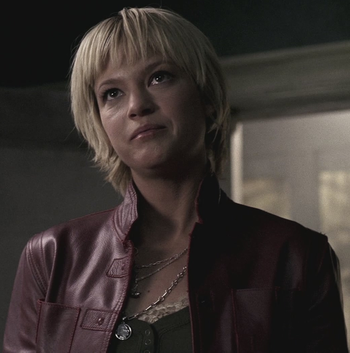 I've been awake for some of it. I couldn't move my own body. The things I did...it's a nightmare.

Meg Masters was a college student from Andover, Massachusetts before a demon-possessed her. Her pleas for help were answered when Sam, Dean, and Bobby exorcised it from her body in "Devil's Trap" (S01, E22), causing her to die from injuries inflicted on her body while she was possessed. 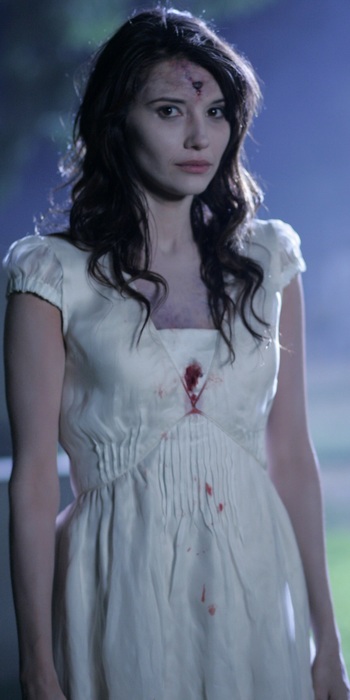 Angela Maison was a young woman who died in a car crash after she had a falling out with her boyfriend. She's brought back to life by another friend, Neil... as a zombie. First appears in "Children Shouldn't Play With Dead Things". 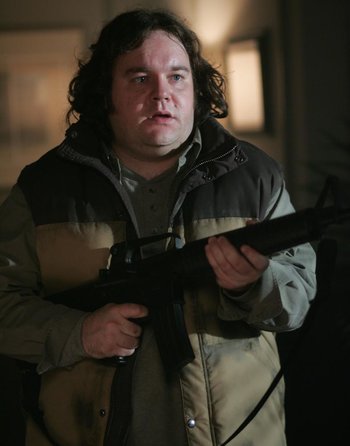 I'm not nuts. I mean, I was so scared that I was losing my marbles. But this is real! I mean, I, I was right! Except for the mandroid thing. Thank you.

Ron was a security guard at a bank in Milwaukee, Wisconsin, when he was beaten unconscious by something that looked like his friend, a teller in the bank. Ron realizes that something is wrong and assumes that his friend was replaced by a half-man, half robot, which he terms a "mandroid". When the police refuse to listen to him, he takes everyone in a bank hostage trying to capture the mandroid, where Dean and Sam are hunting a Shapeshifter that had assumed the shape of a bank employee. He is shot and killed, by the police, but returns as a vengeful spirit in "Are You There God? It's Me, Dean Winchester." (S04, E02). First appears in "Nightshifter" (S02, E12). 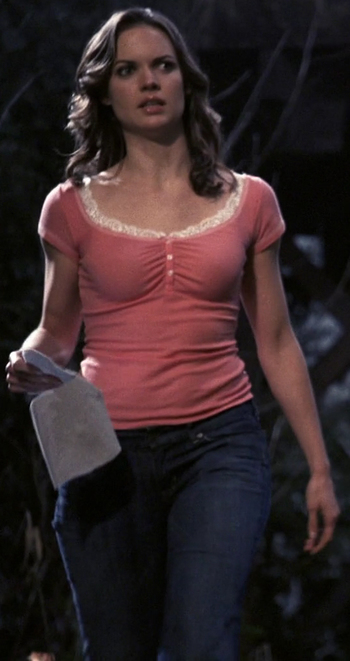 I just can't wrap my head around the dialogue, you know? Salt? Doesn't that sound silly? I mean, why would a ghost be afraid of salt?

Tara Benchley is an actress that the Winchesters meet on the set of Hell Hazers II: The Reckoning in Hollywood, California. Dean is a fan of her work in FeardotCom

Dean and she end up having sex in her trailer. Portrayed by Elizabeth Whitmerenote who in Real Life is not in the films FeardotCom, Ghost Ship, or Boogeyman. Appears in "Hollywood Babylon" (S02, E18). 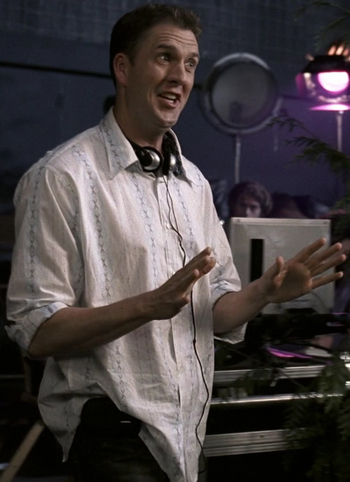 Look, I'm not gonna lie to you. We've had a few setbacks this week. But we all know what Jay and Brad wanted more than anything. And that was to see Hell Hazers II: The Reckoning on screens all across America! Now, we owe it to them to go on and to pull together and make this damn movie, huh?...But not today. Go home. Someone will call you. 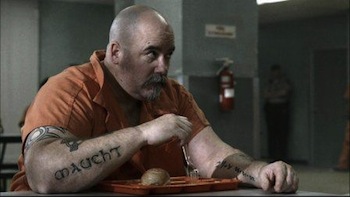 It's okay. Truth is, I have low self-esteem issues. My old man treated me and my brother like crap, right up 'til the day he died.

Tiny is a large bald tattooed prisoner in Green River County Detention Center near Little Rock, Arkansas. He says his brother shot their father, but never says why he is in prison. Appears in "Folsom Prison Blues" (S02, E19). 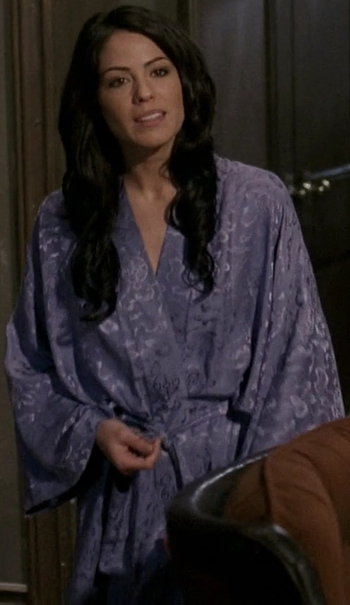 We can have a future together. Have our own family. I love you, Dean. Please.

In the Wishverse created by the Djinn, she is a nurse and Dean's girlfriend. They live together at 53 Barker Ave., Lawrence, KS 66044

. Once Dean returns to reality, he realizes she was really a model in an advertisement for El Sol Beer. In the advertisement, she is lying on a beach under the tag line "go someplace better". Carmen Porter appears in "What Is And What Should Never Be" (S02, E20). 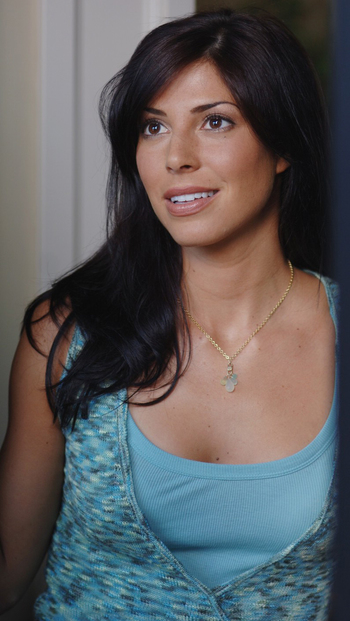 Look, if, um...if you want to stick around for a while...you're welcome to stay. 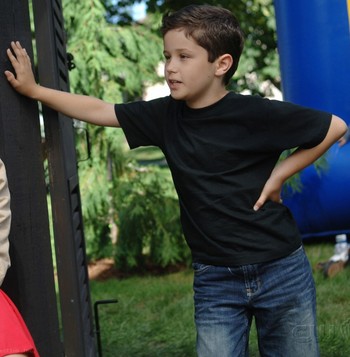 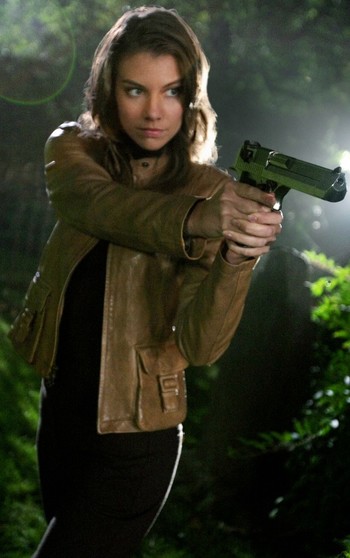 We're all going to Hell, Dean. Might as well enjoy the ride. 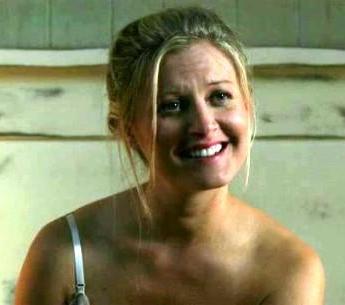 You've seen so much. I just—I just wanted to see you smile.

Karen Singer was Bobby's wife. She became possessed by a demon and attacked him, forcing him to stab her to death to fend her off. Rufus exorcised her and helped Bobby dispose of her body, then trained him as a hunter. Karen first appears in "Dream a Little Dream of Me" (S03, E10). 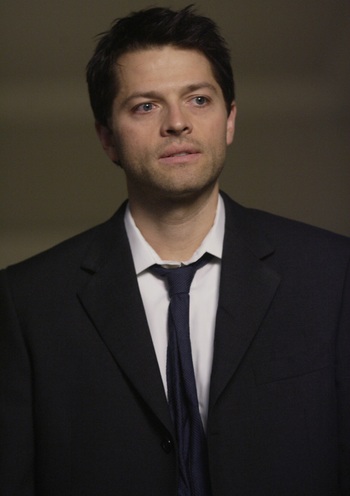 I mean, angel inside of you, it's kinda like being chained to a comet.

Jimmy is a devout Christian who sold ad time for an AM radio show. He is married to Amelia, and has a daughter named Claire. The ability to serve as an angelic vessel runs in his bloodline. When he tells his wife about being contacted by the angel Castiel, she begs Jimmy to get psychiatric help, but Jimmy agrees to be Castiel's vessel if Castiel keeps Jimmy's family safe. Later when Jimmy regains control of his body after Castiel is recalled to heaven, Jimmy no longer wants to be Castiel's vessel and attempts to go back to his family. However, he agrees to return to being Castiel's vessel to spare his daughter the fate of an angelic vessel. Jimmy dies and his soul goes to heaven after Castiel's death in "Lucifer Rising" (S04, E22), but at least some of his traits remain in the vessel, such as Castiel's craving for hamburger in "My Bloody Valentine" (S05, E14). First appears in "The Rapture" (S04, E20). 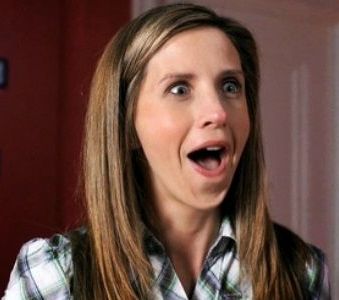 A fan of the Supernatural book series. First appears in "Sympathy For The Devil" (S05, E01). 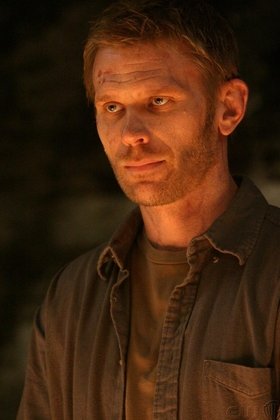 Could you do me a favor there, Satan, and remind me to quit drinking before I go to bed?

A former family man who lost his wife and infant son in a home invasion and lived in the family home by himself, keeping items from his child. Became the vessel of Lucifer throughout Season 5, appeared as Lucifer's ghost afterwards. First appears in "Sympathy For The Devil" (S05, E01). Nick, the true owner of the vessel, appears to re-emerge in Season 14, deeply troubled over what he enabled Lucifer to do and grief-stricken that his decision caused him to desert the fight to have his family's murders solved. 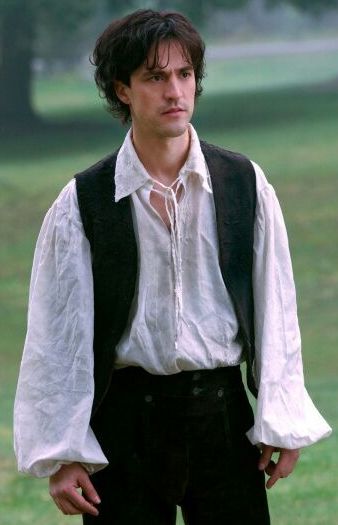 Crowley's son who hates him, and the feeling is reciprocated. First appears in "Weekend At Bobby's" (S06, E04). 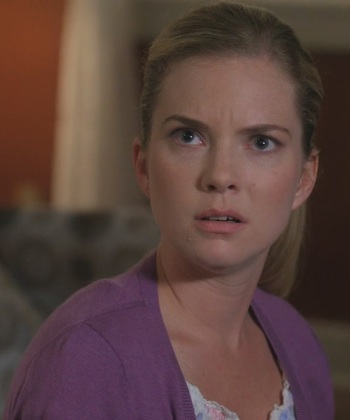 Personal assistant to Don Stark, who is a property developer and a witch. Sam and Dean save her by shooting and destroying a hexed coin in her kitchen after she bites into a cupcake with a beating heart inside and starts choking on blood. First appears in "Shut Up, Dr. Phil" (S07, E05). 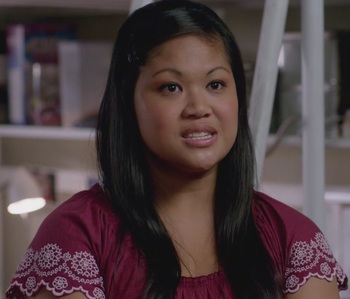 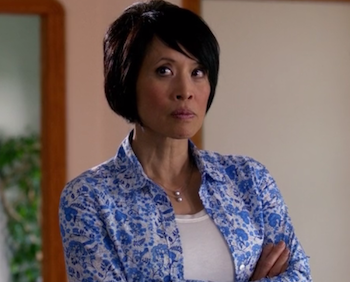 Prophet of the Lord, huh? It does have a nice ring to it. I'll get packed.

The mother of Kevin Tran. First appears in "Reading Is Fundamental" (S07, E21). 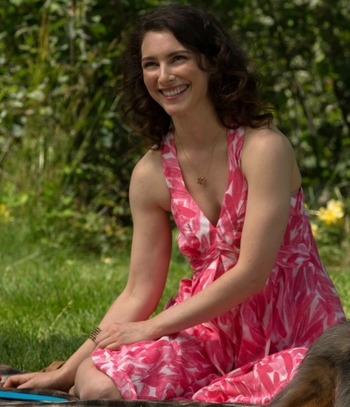 Sam's girlfriend whom he met while Dean was in Purgatory after he hit a dog. First seen in "We Need To Talk About Kevin" (S08, E01). 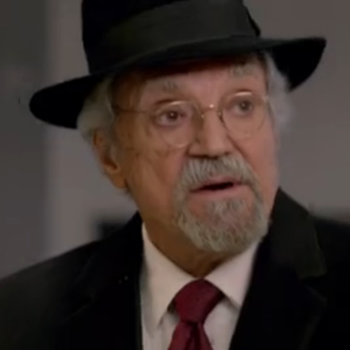 A Rabbi and a member of the Judah Initiative who is searching for the Ledger of the Thules to stop the Nazi Necromancers from recovering it. Appears in "Everyone Hates Hitler (S08, E13). 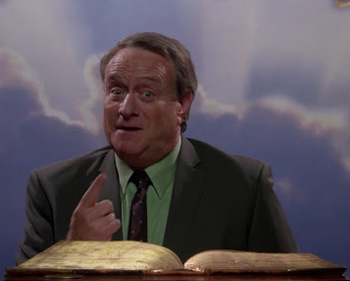 Folks, like I've been telling you, we're in that most sacred of times. A legion of angels reaches out for us. Can you feel their divine presence? And if you do, there's nothing to fear. Heck no. If the angels come a-knocking, you just let 'em on in and fill yourself up with their grace. This is the Reverend Buddy Boyle in the Goin' For Glory Hour wishing you a most blessed day. Amen.

Reverend Buddy Boyle is a popular televangelist with an international following. He preaches during his show called the Goin' For Glory Hour that his followers should say yes to the angels as he believes Bartholomew is an emissary from God. First appears in "I'm No Angel" (S09, E03).

A homeless teenager who is forced to become a blood slave for a vampire coven in O'Neill, Nebraska. She is briefly turned into a vampire but is rescued and cured by the Winchesters and Jody, who decides to adopt her. First appears in "Alex Annie Alexis Ann" (S09, E19). 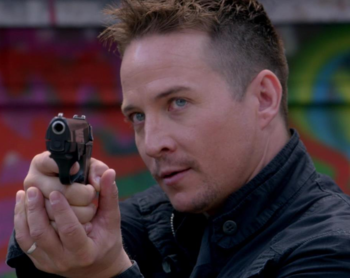 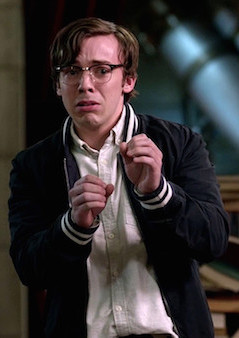 I'll do anything you want, okay? Please. You don't need to do this. Please.
Kelly Kline 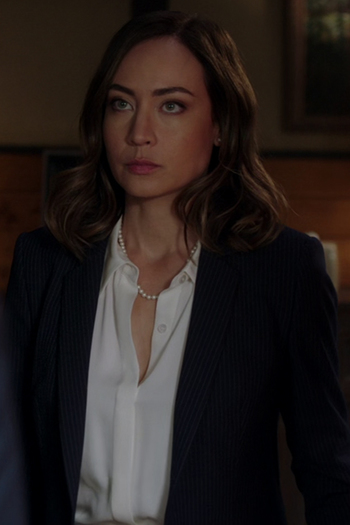 An aide and secret lover of the current President of the United States, Jefferson Rooney. She sincerely wants the two to eventually elope and have a child. Unbeknownst to her, Jeff at that time is possessed by Lucifer, who grants her wish by impregnating her with a Nephilim, whom she later names Jack. Cue demons and angels following her to either keep alive or destroy the creature. Kelly first appears in "LOTUS" (S12, E08). 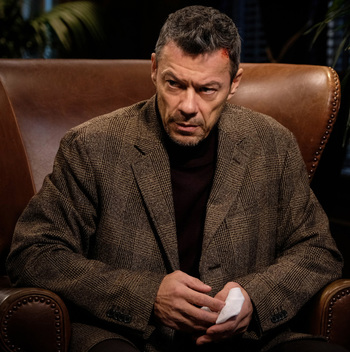 If good men do good things, it can be better. Every day can get better.

A priest from Malta who was given the honorary title apostolic protonotaries supernumerary by the Pope and declared un uomo santissimo or "a most holy man." He spent 20 years doing charity work all over the world, including Africa and South America. When the skull of St. Peter was stolen from the Holy Sisters of Malta Monastery, Father Camilleri was tasked with traveling to America to retrieve the holy relic. He first appears in "A Most Holy Man" (S12, E08).

Portrayed by Frank Welker as Scooby and Fred, Grey DeLisle Griffin as Daphne, Matthew Lillard as Shaggy, and Kate Micucci as Velma 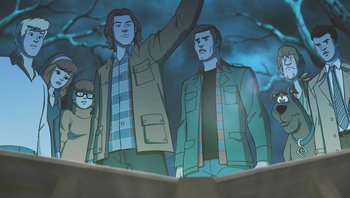 Dean: "Sam, growing up on the road, no matter where dad dragged us, no matter what we did, there was always a TV. And you know what was always on that TV? Scooby and the gang! These guys... they're our freakin' role models, man! Except Fred, he's a wad."

That's right. The Mystery Inc, perhaps the very first hunters of the supernatural. They end up helping Sam and Dean with a ghost that somehow travels from the real world to theirs. They appear in "Scooby Natural" (S13, E16).