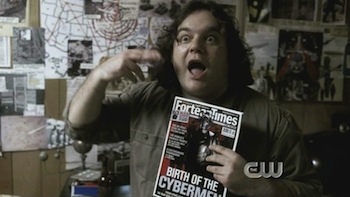 Yes, yes, we see the magazine cover too.

Dean: [about the bank security guard] I like him. He says "okey dokey."
Sam: What if he's the shifter?
Dean: We follow him home, put a silver bullet in his chest.

Dean and Sam end up trapped in a hostage situation in a bank in Milwaukee, Wisconsin

with a former bank security guard who believes a half-man, half-robot is responsible for a string of robberies.

Sam and Dean are investigating robberies of a jewelry store and a bank in Milwaukee, Wisconsin, which appear to be committed by long-term, trusted employees who then killed themselves right after the robberies. The brothers question Ronald Resnick, a security guard who was beaten unconscious by the teller who robbed the bank. They find out that Ron believes a "half-man, half-robot", which he terms "mandroid", is taking other people's forms, killing them, and committing the robberies. He points out glowing eyes on the bank security tapes, which he believes are laser eyes, as evidence that the robber was a "mandroid".

The Winchester brothers realize that Ron has accidentally discovered a shapeshifter and that the City Bank of Milwaukee is located on the sewer between the two prior robberies. The brothers infiltrate the bank disguised as repairmen for the surveillance cameras just as Ron, on his own, enters the bank with a rifle and holds everyone hostage to try and flush the shapeshifter out, starting a police siege of the bank. After Dean is identified by the police and the FBI are called in, it's revealed that a detail led by Agent Victor Henriksen has been charged with apprehending Dean and have been chasing him since the incident with the shapeshifter the year previously. During the siege, Ron wanders into the sights of a police sniper and is killed. Just as the brothers manage to track down and kill the shapeshifter, SWAT storms the building. Sam and Dean escape by stealing SWAT uniforms and slipping away in the chaos.

For this episode = 3 humans and 1 shapeshifter.