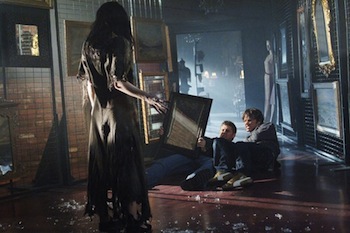 This has gotta be, what, six hundred years' bad luck?
Sam: Might not be one of ours. It might be just some freak medical thing.
Dean: How many times in Dad's long and varied career has it actually been a freak medical thing and not some sign of...awful supernatural death?

The urban legend of Bloody Mary seems to be coming true in Toledo, Ohio.

People start dying in Toledo, Ohio after chanting "Bloody Mary" into a mirror three times. Sam and Dean investigate, learning that once she's been invoked, Mary only kills people who are secretly harboring guilt over the death of another. To lure Mary into a trap, Sam says "Bloody Mary" in front of a mirror three times and Mary appears: it's revealed that before Jessica's death, Sam had been having dreams of her being killed in the exact same way as his mother, and that he feels guilty for ignoring what he now thinks were prophetic visions. Dean is worried about Sam's continued guilt over Jessica's death, but Sam chooses not to tell Dean about the prophetic dreams.