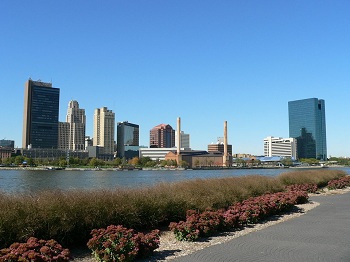 Toledo is the fourth most populous city in the U.S. state of Ohio and is the county seat of Lucas County. Toledo is in northwest Ohio, on the western end of Lake Erie, and borders the state of Michigan to the north.

The city was founded in 1833 on the west bank of the Maumee River and originally incorporated as part of Monroe County, Michigan Territory. Unfortunately the cartographers doing the early surveys of the Midwest had screwed up the southernmost point of Lake Michigan, which was used to determine the southern border of Michigan. Once the discrepancy was discovered, it was found that Toledo actually belonged to the state of Ohio, not the Michigan territory.

Tempers flared, and over 1835-1836 Michigan and Ohio gathered their militias ready to fight it out. In the end Congress and President Jackson awarded Toledo to Ohio, and Michigan got its upper peninsula as a consolation prize. (The incident is now referred to as "The Toledo War".)

Toledo was then re-founded in 1837 at which time it was properly incorporated in Ohio. Toledo grew quickly as a result of the Miami and Erie Canal and its position on the railway line between New York and Chicago.

While having taken a sizable hit in the collapse of the auto industry along with the nearby cities of Detroit and Cleveland, it has still become a city well known for its industry, particularly in glass (giving it its nickname of "The Glass City") and auto assembly, as well as for its art community, education, and local sports teams. It also prides itself on the Toledo Zoo, which is touted as being one of the top ten in the nation.

In fiction, the city is a favorite to mean a not-really-significant-place. Even its residents aren't immune to this. Once a tourism campaign for the city ("Toledo" as in things to do), was turned into a Simpsons reference of "D'oh!" instead of "Do". While Cleveland holds claim to the name "The Mistake on the Lake", sometimes Toledo is called "The Other Mistake of the Lake".

"Holy Toledo! Somebody had fun..."
— Simon in Die Hard with a Vengeance

We've all heard the phrase "Holy Toledo!" in fiction. It's an exclamation of surprise, but its origins are unknown. No one's even sure if it refers to Toledo, Ohio or Toledo, Spain. Locally it pops up often, and is unavoidable in local religion stories.