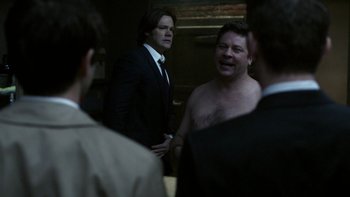 So, in "My Bloody Valentine", Dean and Sam think Cupid might be killing people, so they get Castiel from the garbage where they left him to hunt him down!
—One recap of the episode, excluding the fact that it was supposed to be a recap of a movie.

The Horseman Famine shows up. The town starts going crazy for love, food, sex, drugs, anything. Some of the first victims found have their hearts marked with and Enochian letter left by a Cupid, but when they question the Cupid, they learn it's not him. Castiel starts eating burgers and Sam goes back into the "desperate cravings" stage of demon blood addiction. Dean chains Sam up in their motel room while he and Cas go to take down Famine, but two demons show up in the motel room and Sam drinks their blood. He heads out to meet Famine, who offers him more demons to drink. Sam uses his juiced-up powers to pull the demons out of their bodies, removing the temptation, and then knocks out Famine.

Famine, also known as the Black Horseman, is one of the Four Horsemen of the Apocalypse, along with Death, War, and Pestilence.

Famine, also known as the Black Horseman, is one of the Four Horsemen of the Apocalypse, along with Death, War, and Pestilence.