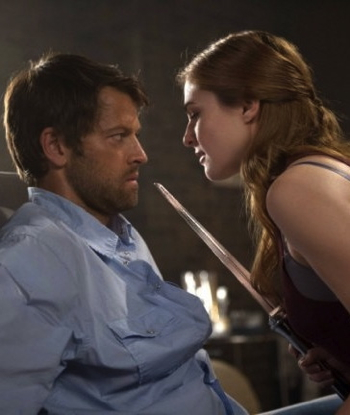 Looking for this?
Castiel: There really is a lot to being human, isn't there?
Dean: It ain't all just burritos and strippers, my friend.

Sam and Dean are concerned that Castiel has not yet made it to the the Men of Letters' bunker in Lebanon, Kansas

, and try to find him. Castiel struggles with his humanity and the hostility of the angels as he travels from Emory Park, Iowa

, and then to Detroit, Michigan

The Road So Far plays. THEN scenes show killing the Nephilim and the Cupid's bow as Castiel says, "I'm trying to fix Heaven. Metatron is trying to fix Heaven." Naomi responds, "Metatron isn't trying to fix anything. He's trying to break it" as we scenes of her death, the angels falling, and the theft of Castiel's Grace. Dean explains, "That means you're human. Cas, listen to me. There are angels out there, okay? And they're looking for you, and they're pissed." Hael attacks Castiel, and after she vows "Until their last breath, they will seek revenge on the angel that did this, who destroyed Heaven", Castiel kills her. Meg watches Castiel smite a demon and snarks,

'That was beautiful, Clarence.' Dean reveals, "We're dealing with a Reaper." Bobby's Reaper shouts, "I can find you anywhere!" Dean admits, "Sammy's hurt--he's hurt real bad." Then Dean prays, "This one goes out to any angel with their ears on. This is Dean Winchester, and I need your help." Ezekiel says, "There is a chance I can fix your brother from the inside." Ezekiel in Sam's body says, "Sam can eject me at any time. And if Sam does eject me, he will die." Dean answers, "Then we keep it a secret for now."

NOW two priests walking outside of St. Anne's cathedral in Iowa are interrupted by a man and a woman in suits who are looking for Castiel. Meanwhile Castiel is struggling with basic hygiene in the shared bathroom at St. Anne's Shelter for Men. The next morning Castiel is picking up trash outside the cathedral, when he notices blood on a stone. He follows a trail of blood and finds both priests dead in the cemetery with their eyes scorched out and their bodies impaled and dangling in the air.

The Teaser ends with a burst, and the Title Sequence plays with burning wings and high pitched whine.

Dean is lounging in his bathrobe at the Men of Letters' bunker, when Sam returns from his run with breakfast in a take-out container. Dean mentions he is worried that they have not heard from Castiel and also tells Sam he should be taking it easy after the trials. Sam reassure Dean he feels fine, but then Ezekiel takes over Sam's body as his eyes glow blue. Ezekiel tells Dean that he has heard on Angel Radio that a faction of angels are organizing themselves in order to find human vessels, and this group is also hunting Castiel. Dean asks if Naomi is in charge, but Ezekiel says he has not heard that name. Dean asks Ezekiel to let him talk to his brother, and Sam again gains control. Dean tells Sam the angels may be more dangerous than they thought and they need to find Castiel.

A pharmacist takes a break at work, pulling out his mobile phone to watch Reverend Buddy Boyle preach about this being the most sacred of times. Another man on a sidewalk is watching the same program on his mobile phone. We then cut to the studio where Goin' For Glory Hour is being filmed as Reverend Buddy Boyle is encouraging his followers to welcome the angels and to fill themselves up with the angels' Grace. After the director says they are clear, a man in a grey suit praises Buddy on his sermon. Buddy addresses the man as Bartholomew and says the compliment means a lot as it is coming from an emissary of God and an actual angel. Bartholomew tells Buddy that God has personally assured him that God is very pleased with Buddy's work and God is preparing a special reward for Buddy. One of Buddy's followers interrupts them to declare that she wants to give herself to an angel. When she says she is certain, a white light enters the room and then her mouth. Within a few seconds, she starts jerking, blood flows from her eyes and nose, one eyeball pops out of the orbit, and then she explodes, spraying blood and tissue across the room. Buddy, who is covered with blood from head to toe, is at first upset. However, Bartholomew, while brushing blood off his suit with a handkerchief, explains that not all who are willing are designed to contain Heaven's grace. Buddy accepts this and compares it to the lamb of the sacrifice.