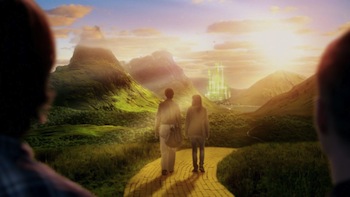 You said you were looking for adventure. Well, here it is, Red. Come help me find my damn dog.

Hoping they can reprogram the bunker's computer to track angels, Sam and Dean call in Charlie. While they're working on it, a bottle falls over, which contains Dorothy and the Wicked Witch. Dorothy enlists their help in killing her.

For this episode = 2 humans and 1 wicked witch.