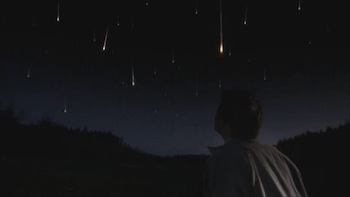 Dean: Angels. They're falling.
"What's that old expression? Success has many fathers, failure is a Winchester."
—Crowley to Sam and Dean

In a restaurant in Sioux Falls, South Dakota

, Sheriff Jody Mills is on a blind date with Crowley, whom she knows as Roderick. He is quite charming, and they are the last two in the restaurant when Crowley brings up the subject of loss. Jody becomes tearful as she recalls the loss of her son and husband. While she goes to the bathroom to fix her makeup, Crowley takes out a picture of Jody and starts to recite an incantation, which causes Jody to collapse and begin coughing up blood. As the incantation ends, Dean calls Crowley. Dean says they will stop the trials to close all the gates to Hell if Crowley stops killing the people they have saved. Crowley demands the Winchesters also give him the demon tablet, and Dean agrees if Crowley gives them the angel tablet.

Dean and Sam meet Kevin at a weathered roadside billboard for Dave and Paul's Chili Pot Restaurant, which has a picture of a big red horned devil. Kevin digs up the half of the demon tablet he buried there, and reunites it with the other half in his backpack. Dean gives Kevin the key to the Men of Letters' bunker, and tells him to lay low. Dean and Sam take off in the Impala with the demon tablet, after Kevin tells them they are doing the right thing.

Metatron and Castiel are sitting at a bus stop in Houston, Texas

For this episode = 2 humans and at least 1,000 angels (though no specific number is given).