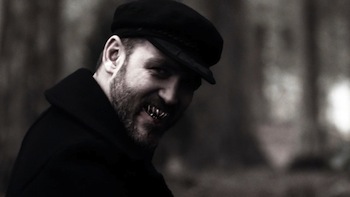 Dean sent me.
I ain't exactly the retiring type, so if you idjits figure out a way to spring me...
—Bobby to Sam about an afterlife in Heaven
Advertisement:

On Garth's houseboat, the Fizzle's Folly in Warsaw, Missouri

, Kevin calls Sam and Dean after he starts having terrifying visions and hearing Crowley in his head. Sam and Dean tell him these are stress-induced hallucinations from working on translating the half of the demon tablet. Kevin has managed to translate the second trial they need to complete to close all the Hell Gates: an innocent soul must be rescued from Hell and released to Heaven.

Sam and Dean summon a crossroads demon and torture him until he reveals that rogue Reapers can take people and souls out of Hell. Sam and Dean find one of these rogue Reapers in Kansas City, Missouri, named Ajay. Ajay says he was the Reaper who took Bobby Singer and, because of interference from Crowley, Bobby was Rerouted from Heaven to Hell instead. Sam insists on going to Hell alone to rescue Bobby, despite Dean's objections, and they strike a deal with Ajay.

Ajay takes Sam to Purgatory, and tells Sam how to find a secret portal into Hell. He tells Sam to meet him back at this spot in exactly 24 hours. Dean checks in on Kevin and brings him a burger and fries. Crowley shows up in the back seat of the taxicab Ajay is driving. Ajay tells him he helped get Sam into Hell and that he should be back in 17 hours. Crowley then kills Ajay with an angel blade.

Sam traverses Purgatory, dispatching a vampire on the way, and finds the portal to Hell. He passes souls begging for help to find Bobby in a cell. Bobby initially does not believe it is really Sam, but then helps Sam to kill demons as they escape Hell. A demon pretends to be Sam, but Bobby stabs the demon with Ruby's knife. Bobby and Sam make it through the portal into Purgatory.

Kevin is under so much stress he hides his half of the tablet and refuses to tell Dean where this half of the demon tablet is. Naomi shows up on Garth's houseboat and tries to convince Dean to help her find Castiel, but Dean remains suspicious of her. Naomi does tell Dean that Ajay's secret route to Hell includes a detour through Purgatory. Dean goes to find Ajay, and finds him dead in his taxi. Dean realizes Sam is likely stuck in Purgatory.

Dean calls Benny, and asks him for a big favor. Benny agrees to letting Dean behead him so that Benny will die and go to Purgatory, where he can help Sam escape. Meanwhile, three monsters attack Bobby and Sam in Purgatory. Sam manages to behead two of them while Bobby struggles with the third. Suddenly, Benny appears and rips out the throat of the monster attacking Bobby. Bobby raises his knife to stab Benny, but Sam stops him and explains that Benny is Dean's friend. Bobby is disturbed by the idea of Dean being friends with a vampire, but follows Benny, who leads them to the human portal out of Purgatory.

At the portal, Sam and Bobby cut their arms, and while holding the wounds near each other, Sam recites an incantation, which causes Bobby to transform to a glowing light and enter the wound in Sam's forearm. Before Benny can follow suit, three vampires arrive. Benny takes on the vampires, using himself as bait to allow Sam to escape through the portal with Bobby. Sam finds Dean waiting on the other side of the portal in the Hundred-Mile Wilderness of Maine

. Sam tells Dean how Bobby helped save them. Sam then cuts his arm and says another incantation, which causes Bobby's soul to pour out of the wound on his forearm as a bluish light that starts to rise in the sky.

Bobby's souls stops its ascent and turns into a red-black cloud. Crowley then appears to the Winchesters, intent on pulling Bobby's soul back to Hell. When Sam and Dean try to stop this, Crowley telekinetically flings them against two different trees, leaving them pinned against the trunks. Naomi then appears, but before she can smite Crowley, he disappears. Naomi then releases Bobby's soul so it can continue to ascend to Heaven. Naomi disappears after telling Dean he can trust her. Sam then recites the Enochian phrase which must be said after each trial, and his arm glows with a reddish light as he collapses from pain.

Back on Garth's houseboat, Kevin is painting wards in red paint on the windows while hearing Crowley whisper threats. Suddenly the windows shatter and Crowley appears. Crowley says he tortured Kevin's mother, Linda Tran, and when she would not tell him where Kevin was, Crowley killed her and took the information off her cell phone. Kevin screams as the scene fades out. Later, Dean and Sam arrive at the houseboat and find it empty with the windows intact. They believe Kevin has freaked out and is on the run.