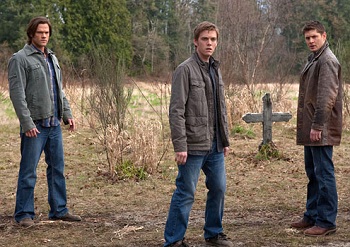 Chuck is typing away at his computer, waxing lyrical about the most important object in the universe: a 1967 Chevy Impala. There's a toy soldier stuck in the ashtray where a young Sam once shoved it, and Legos rattling in the vents thanks to young Dean. Why should we care about these details? Lucifer doesn't. But these, Chuck says, are the important things.

Meanwhile, it's go time for Team Free Will. Sam and Dean have had their heart-to-heart, jugs of demon blood are in the trunk, and the Horseman rings are at the ready. As they drive to meet the Devil in Detroit, with the depowered Castiel sleeping in the backseat and Bobby following behind, Sam makes Dean promise him that once he's gone, Dean will leave him where he is and go live a normal life with Lisa. In Detroit, Sam says his goodbyes to Bobby and Cas and downs the blood. Then he and Dean enter the building. Things don't go according to plan. Lucifer knows that they have the rings. Sam says yes anyway and Lucifer takes him over. Dean opens the gate to the Cage, but it's no use. Lucifer's in control. He zaps himself away.

Cas and Bobby have given up, but Dean, still determined to do something, calls up Chuck and asks him where the battle will take place. Turns out, it's a cemetery near Lawrence, Kansas. Dean resolves to go there and talk to Sam. Cas tries to talk Dean out of it, telling him that all he'll see is Michael killing his brother. Dean responds that in that case, he needs to be there for Sam when it happens.

The next day, Michael and Lucifer meet at the cemetery, wearing Adam and Sam respectively. They talk briefly. Lucifer tries to convince Michael that they don't need to go through with this, that they could just stop. But Michael sees that as rebellion against their father and refuses. The fight is just about to begin when suddenly, there's the growl of an engine. The Impala roars up, and Dean gets out. Michael and Lucifer are understandably confused, and refuse when Dean asks for five minutes to talk to Sam. So Cas, who's standing nearby with Bobby, nails Michael with a holy oil Molotov, temporarily sending him away. Lucifer is not impressed. With a snap of his fingers, he causes Cas to explode in a cloud of gore. Bobby tries to shoot him, so Lucifer breaks his neck. Then he turns to Dean, throws him against the hood of the Impala, and begins beating him to a bloody pulp. Dean's face becomes a mangled, bleeding mess, yet between the punches, he keeps telling Sam that it's okay. Lucifer raises Sam's fist for one last blow.

Suddenly, light glints off the side of the Impala. The Impala with the toy soldier in the ashtray and the Legos in the vents; the Impala that Sam and Dean have slept in, laughed in, pranked each other in, argued in, driven all across the country in; the Impala that has carried them as they faced everything, together. These memories flash faster and faster through Sam's mind until he's left with an image of himself and his brother, hugging.

And Sam lowers his fist. He tells Dean that he's going to be okay. Then he takes out the rings and opens the pit. Before he can jump, Michael appears, and tells Sam to stop because he and his brother are destined to fight. But Sam ignores him, and lets himself fall. Michael steps forward and grabs his arm, tries to pull him back, but Sam's weight is too much and he is dragged into the pit as well. The ground closes up, and Dean is left completely alone. Until he looks up, and there's Castiel, resurrected once again and restored to his angelic glory and promoted to a Seraphim. Cas touches Dean's face, and instantly it's healed. He brings Bobby back to life as well.

So, Chuck asks, what does this all add up to? Cas returns to Heaven to deal with the anarchy up there. Bobby continues to hunt. Dean, against every fiber of his being, keeps his promise to Sam and goes to live a normal life with Lisa and Ben. What's the point? According to Chuck, the point is despite being forced to deal with everything from demons to destiny, Sam and Dean chose family over everything else. Chuck types the words "THE END." Then, with a smile and the assertion that nothing ever really ends, he vanishes.

Meanwhile, Dean is eating dinner with his newfound family. Outside, a streetlight flickers. Standing underneath it, staring at the scene through the window, is Sam....

For this episode = 8 demons.