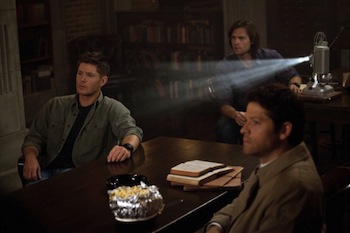 Well, that was weird...with three exclamation points.
I'm killing everyone you've ever saved.
—Crowley to Sam and Dean
Advertisement:

Tommy Collins (Graham Wardle), who was last seen in "Wendigo" (S01, E02), is in a cabin in Lost Creek, Colorado

, with his girlfriend. He starts to hear a growling noise, and assumes they are being hunted by a wendigo. He lights up a blow torch, but then is overcome by pain. He is thrown around by an invisible growling attacker. Blood then starts to pour from his ears and eyes, and then his head explodes.

At the Men of Letters' bunker in Lebanon, Kansas

, Sam and Dean are going through the files collected by the Men of Letters on any demonic possessions for the last 300 years. Castiel is staying in the bunker as he heals from his wound, but Dean has not forgiven him for taking off with the angel tablet. Sam comes across a notation for a Class 5 Infernal event with the comment "Weird!!!" They find the file in room 7B of the bunker, and also discover a hidden dungeon which appears to have been made to hold demons.

Sam finds a reel of film from 1957 in the file, which Sam, Dean, and Castiel watch. Josie Sands (Alaina Huffman) is shown filming two priests, a young Father Simon and older Father Max Thompson, who are trying a new type of exorcism which will actually cure the twisted soul of the demon. The attempt in the film fails, leaving the possessed woman dead. Sam's research reveals Father Thompson died in 1958, but Father Simon is still alive. Sam and Dean drive to St. Benedict's Church in St. Louis, Missouri

, leaving Castiel behind because Dean does not want his help. Father Simon explains that Father Thompson continued his experiments after the failed exorcism, but was killed and torn apart by something in 1958. Father Simon gives Father Thompson's records to Sam and Dean.

Metatron, who goes by Marv in public, finds Castiel while Castiel is trying to buy groceries he thinks Sam and Dean would appreciate. Metatron tells Castiel that Heaven's Civil War continues, with numerous factions fighting each other, and while Naomi is a player, she is not in charge. Metatron wants Castiel's help in closing the gates of Heaven, as he thinks if the angels were all stuck in Heaven together they would work things out. Metatron transports to a restaurant which serves caramel apple crepes in Ojai, California

Back at the Men of Letters' bunker in Lebanon, Kansas

, Sam and Dean listen to a tape recording of Father Thompson's 19th trial at attempting to cure a demon, which was made 2 days before the priest's death. Father Thompson repeatedly injects his own blood, which was purified by confession, into a demon, who possessed a man named Peter Kent and ate his 2 young sons. After 8 hours and repeated injections, the demon seems remorseful and confused by the past horrors he committed.

Castiel follows Metatron to Eugenie's Restaurant, where Jane (Linda Tomassone), the waitress, serves them and flirts with Castiel. Metatron reveals that the first trial for closing the gates of Heaven is cutting out the heart of their waitress. She happens to be the only Nephilim, offspring of an angel and a human, on earth. Castiel argues that she is innocent, but Metatron convinces Castiel that he must do this to help Heaven.

Sam and Dean recover the pieces of Abaddon's body and sew her back together in an empty dairy barn. Although she is unable to move because of the devil's trap-etched bullet in her head, they do not reattach her hands, to be on the safe side. Abaddon recognizes the ritual for trying to cure a demon, and tells them she tore Father Thompson apart to make an example of him after word about what he was trying to do got back to the home office. Before they can start the exorcism, Sam receives a call from Crowley, and Sam and Dean step outside to take the call. Crowley directs them to look at the Denver Times, where they read about Tommy Collins' death. Meanwhile, Abaddon's hand escapes the box and jumps on to her shoulder. Her hand reaches inside her mouth and pulls out the bullet, releasing Abaddon from the effects of the devil's trap. When Sam and Dean enter the barn, Abaddon is gone, leaving the bullet on the floor.

." Dean recalls they worked a case there. When they get to the address, they find Jenny Klein (Cindy Busby) dead in her oven. They receive another call from Crowley, who is sitting in his office with a copy of the books about the Winchesters that were written by Chuck, under the name Carver Edlund. Crowley tells the brothers that he is killing off the people they saved, and will continue to kill a new person every 12 hours until they give him the demon tablet. Because he knows they will try to stop him, Crowley explains he has an object lesson for them in 57 minutes at the Ivy Motel, room 116, in Indianapolis

Castiel and Metatron are waiting for Jane to close up the restaurant. When the angels start following her, she confronts them and says she knows what they are and can see their halos. She tells them she is just trying to live her life when Metatron refers to her as an abomination. Castiel approaches her with his angel blade out apologizing for what he intends to do, when Jane attacks him. Her eyes glow silver, and Castiel is thrown against a fence and a dumpster, dropping his angel sword. Metatron hits Jane, but she easily lifts him by the neck and starts choking him. Castiel grabs his angel blade and stabs Jane through the neck, killing her.

When Sam and Dean arrive at the motel room in Indianapolis, they find Sarah Blake (Taylor Cole), who is scouting an estate sale for her father. They explain the danger she is in and ward the room with sigils and devil's traps. As midnight approaches, a cordless phone in the room rings, and all three of them pull out their guns. Dean answers the phone to hear Crowley counting down from five. As Crowley finishes the countdown, Sarah collapses, gasping for air. Crowley reveals he is using witchcraft he learned from his mother. As Sam and Dean tear the room apart looking for the hex bag, Sarah dies. Crowley tells Sam and Dean he will continue to unravel their life's work by killing everyone they ever saved until they surrender to him. Dean throws the phone in frustration and it smashes apart to reveal the hex bag.

Sam and Dean return to the Men of Letters' bunker. Sam is shaken by Sarah's death, and he speculates that this may be one they can't win. But Dean is not ready to give up and says they will "kick it in the ass" like they always do.

For this episode = 4 humans and 1 Nephilim angel.