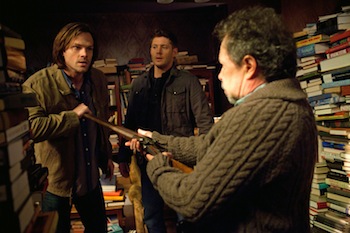 All the time you've been hiding here, how much suffering have you read over? Humanity's suffering! And how much of it has been at the hands of your kind?!
What you brought to His Earth, all the mayhem, the murder, just the raw, wild invention of God’s naked apes, it was mind-blowing.
—Metatron to Sam and Dean
Advertisement:

Kevin has been captured by Crowley and his short-term memory was erased so he believes he is still on Garth's boat and that Sam and Dean have brought him the other half of the demon tablet. Kevin is initially suspicious when the fake Sam and Dean working for Crowley do not use the secret knock when they arrive, but when he sees the other half of the tablet, he is so excited he reveals to the demons that he should now be able to discover what the third trial is which will allow them to close all the Gates to Hell.

Meanwhile, at the Men of Letters' bunker in Lebanon, Kansas

, Dean is trying to get the feverish Sam to eat some stew when they receive an e-mail link to a video from Kevin. Kevin had set up this video to be e-mailed to Sam and Dean along with his notes on the tablet if he does not reset a command each week. The only reason he would not reset the command is if he is captured by Crowley or dies. Sam starts to study Kevin's notes, and Dean berates himself for failing to keep Kevin safe.

Castiel is drinking coffee in a Biggerson's Restaurant in Santa Fe, New Mexico

. There is a buzzing noise, and Castiel notes vibrations in his coffee. Castiel disappears just before two other angels, Ion and Esper, appear in the restaurant. Ion and Esper report back to Naomi, explaining how Castiel is using the similarity of the layout between the different Biggerson's Restaurants to be in all the locations of this ubiquitous restaurant at once until he appears in a single location he chooses. This tactic is making it impossible for them to catch Castiel and recover the angel tablet, and Naomi insists they make Castiel stop. Castiel is seen appearing in the same position in Biggerson's Restaurants in Palm Bay, Florida

Sam recognizes a symbol in Kevin's notes, which is used every time God's scribe, Metatron, makes an editor's note, as a symbol used by the Two Rivers Tribe in Colorado. Sam and Dean arrive at Two Rivers Hotel and Casino off Route 34 in Colorado

. Sam starts to have a ringing in his ears and becomes even more ill. Dean questions the gift shop owner and learns that Two Rivers Tribe settled in this location because the great spirit's sacred messenger dwelt here, and if they offered the spirit stories, he would bless them. Sam notices boxes of books being delivered to a room in the hotel, and concludes that this is where Metatron is staying. However, Sam collapses from the fever, and Dean has to put him in an ice bath to bring his temperature down.

When Castiel teleports back to the Biggerson's in Santa Fe, he finds the staff and patrons dead, except for Kara, the waitress who previously served him coffee. Kara has her eyes burned out and is repeating, "They said you have to stop." When he kneels down to help her, Ion appears behind Castiel with his angel blade at Castiel's throat. Naomi starts interrogating Castiel, but he will not reveal where the angel tablet is. A search of the other Biggerson's Restaurants does not turn up the tablet. Crowley suddenly appears, shooting Esper through the neck and Ion in the arm with bullets made from a melted-down angel blade. Naomi starts to glow with light, but when Crowley points the gun at her, she disappears. Crowley then shoots Castiel in the stomach, and Ion, who is actually a double agent for Crowley, helps Crowley bring Castiel back to Crowley's office. Crowley says he knows that Castiel won't tell him where the tablet is, but he has already figured out where Castiel hid the tablet. Crowley then reaches into the wound in Castiel's abdomen and pulls out the angel tablet.

After Sam regains consciousness, Sam and Dean enter the room where the books were delivered. They find an older man with a shotgun surrounded by stacks of books who has no idea who the Winchesters are and asks them if they are working for Michael or Lucifer. They realize that he is Metatron, and that the Scribe of God has so isolated himself that he did not hear about the Apocalypse or the Civil War in Heaven. Metatron recognizes the tinnitus Sam is suffering from as resonance from being so close to him, the source of the Word of God, and knows that Sam has undertaken the trials. Metatron explains that he has been hiding from the archangels since God disappeared, as he knew they were scheming to take over the universe, but would need the Word of God and him to do this. Sam and Dean try to explain the suffering humans have experienced at the hands of angels, and tell Metatron about Kevin, whom they presume is dead.

Kevin asks the demons pretending to be Sam and Dean to get him barbecue and Pad Thai, but when they return he says he is still having trouble translating the portion of the tablet he has, and Kevin asks them to get the other half of the demon tablet, which Kevin hid. These demons find themselves in a devil's trap when they go to the location Kevin gave them. The demons call Crowley, who is furious and goes to confront Kevin. When Crowley asks how Kevin knew the charade was not real, Kevin explains that the real Sam and Dean would never have gone to get him barbecue when there were leftover burritos in the fridge. When Kevin refuses to tell Crowley what is on the tablet, Crowley strangles Kevin. Metatron erases Crowley's angel warding and transports Kevin's body, still clutching the second half of the demon tablet, in blinding white light that burns Crowley. After Kevin's body appears in Metatron's room in the Two Rivers Hotel, Metatron touches Kevin's chest, bringing him back to life and healing him. Kevin wakes up and says he knows what the third trial is, but when Sam asks what it is, it is Metatron who answers, "To cure a demon."

Castiel was left alone with Ion, who is trying to excuse his actions by explaining how hard it was to work for Naomi in Heaven's intelligence division. Castiel digs the angel-blade bullet out of his gut and distracts Ion, knocking him to the ground. He then pushes the bullet through Ion's eye and into his brain, killing Ion. Sam and Dean are driving in the Impala, discussing what the consequences of completing the trials might be, when a figure suddenly appears lying in the road. Dean slams on the breaks, and they avoid hitting the wounded Castiel.