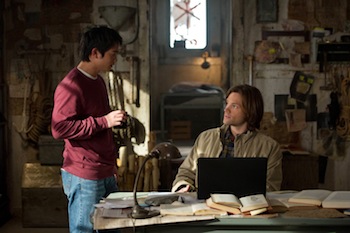 This whole "saving the world" thing? It's a marathon, not a sprint. —Sam to Kevin
The tablet says "Whosoever chooses to undertake these tasks should fear not danger nor death nor" a word I think means "getting your spine ripped out through your mouth"..."for all eternity".
—Kevin [to Sam and Dean]
Advertisement:

Sam and Dean are settling into the headquarters of the Men of Letters in Lebanon, Kansas

, when they receive a phone call from Kevin Tran. They rush to Garth's boat, Fizzle's Folly in Warsaw, Missouri

, to find that Kevin has discovered that reciting a spell in Enochian after completing each of three trials will close all the Hell Gates forever. The first trial is killing a hellhound and bathing in its blood. Translating the tablet has taken a toll on Kevin's health, but he is determined to complete his work.

Sam finds that demon signs were centered around Shoshone, Idaho

10 years ago, right around the time the Cassity family struck oil on their farm. The brothers conclude that this unexpected good fortune was the result of a crossroads deal and take a job on the farm to kill the hellhound when it comes to collect the soul of the individual who made the deal. They suspect the owner of the ranch, Alice Cassity, made the deal, but while the Winchester brothers are following her, her husband Carl is killed by a hellhound.

Dean wants to summon a crossroads demon, believing they missed their chance to kill the hellhound, but Sam tells Dean about Alice saying she doesn't feel anything after Carl's death, which confuses her as she had thought he was the love of her life. This convinces the brothers that Carl must have made his deal for Alice's love and not to strike oil. The stay to observe the Cassity family as the other members, Noah (Alice's father), Cindy (the middle sister), and Margot (the youngest sister) arrive after Carl's death. While serving drinks to the family, Sam overhears that the last time they were all together was when a charming English salesman named Crowley was visiting. Now the Winchesters realize just which crossroads demon made the deal.

When the hellhound kills Margot Cassity, Sam and Dean handcuff the remaining Cassity family members inside a circle of Goofer dust to protect them from the hellhound. Kevin calls them to let him know he was able to find a reference to hellhounds on the tablet, saying that hellhounds can be seen through an object scorched by holy fire. Dean takes two pairs of eyeglasses and passes them through burning holy oil, which the brothers keep in their trunk in case they need to trap an angel. Dean asks Sam to watch the Cassitys while Dean hunts the hellhound, making it clear that Dean wants to complete the trials himself and save Sam from the likely fate of the person who undertakes the tasks.

Dean goes to warn the manager of the ranch, Ellie, to stay in her room. Ellie tries to seduce Dean and then confesses that the hellhound is after her, as she made a deal to cure her mother's Parkinson's disease. Dean tells her to stay in a circle of Goofer dust, and finds the hellhound in the barn. Dean is slashed by the hellhound and thrown against the wall, losing the glasses that allow him to see it and dropping Ruby's knife. Before the hellhound can completely tear Dean apart, Sam shoots it. This distracts the hellhound long enough for Sam to get Ruby's knife. Sam slices open the belly of the hellhound while it is standing over him so that he is soaked in its blood.

Dean wants to find another hellhound so he can complete the trials, but Sam tells Dean he is not going to let this be a suicide mission for Dean, explaining how much Dean means to him and others. Sam then recites the Enochian phrase, followed by his right arm glowing with a white light, signaling he has completed the first trial. Dean reluctantly realizes that he is going to have to let Sam complete the trials.

For this episode = 2 humans and 1 hellhound.