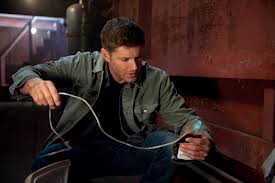 "A little rest, half a cooler full of AB negative, most wounds short of an amputation will mend up, vampirically speaking." —Benny to Dean
"I have to agree with the vampire, Dean. The risk of crossing Purgatory with a seraph

In Eagle Harbor, Washington, Benny, the vampire who helped Dean escape Purgatory, finds Quentin, a member of Benny's old vampire nest and also the person who held Benny's legs when he was beheaded. Benny asks Quentin where the Old Man is, but there are two other vampires who ambush Benny. He beheads Quentin, but is badly wounded by the others.

We then find the Winchester brothers in the Paradise Motel in Enid, Oregon. They have been trying to track down Kevin, but continue to be outsmarted by him, as he manipulates his credit card records. Dean gets a call from Benny asking for help, and leaves without telling Sam where he is going, which results in an argument between the two brothers.

Dean has a flashback of fighting with Benny in Purgatory as he drives to Washington. Sam starts tracking down Kevin, but is sidetracked into a search of Amelia's credit history. He is distracted by the sound of a malfunctioning fan, and has his own flashback of getting a job at a motel and getting to know Amelia.

Dean finds Benny unable to stand and covered in blood. He gives him a cooler full of plasma for transfusions and Benny makes an almost-complete recovery. When Dean asks what is going on, Benny is reluctant to tell him and says he has done enough already. When Dean insists on knowing, Benny responds, "You and that whole friend thing, man". This triggers a flashback to the two of them with Castiel in Purgatory. Benny is trying to convince Dean that continuing with Castiel is too risky, and Castiel agrees with him, pointing out it is unlikely an angel could pass through a portal made for humans. Dean insists Castiel is going to make it out with them.

In the present time, Benny reveals that he is hunting his maker, who killed Benny after he betrayed the nest over a woman, Andrea. The nest attacks yachts, functioning as vampire-pirates. They search Quentin's belongings and are able to track down the nest in Prentiss Island by finding a cable bill. As they drive to the island, Benny tells Dean how he left the nest and changed his life after meeting Andrea, but they were tracked down by his maker, who killed him and Andrea.

When Dean and Benny infiltrate the vampire nest, Benny is so surprised to see Andrea alive that he is captured and handcuffed to a chair by the vampires. Dean decides to call Sam and ask for help at this point and then starts hunting down the vampires in the nest. Benny finds out that Andrea was turned into a vampire and is currently the maker's lover and second-in-command. Andrea manages to slip Benny a knife and the keys to the handcuffs before he is taken to see his maker. Benny finds out that Andrea was evidently kept alive to maintain a connection to Benny, the maker's favorite. Benny unlocks his handcuffs and beheads Sorento. His maker tries to convince him that everything he believes in is false, but Benny attacks him as well.

After killing several vampires, Dean has another flashback to Purgatory, where Castiel, Benny, and he are attacked by a group of Leviathans and Benny saves Castiel's life. Sam steals a car and starts driving to Prentiss Island. Benny returns the knife, now covered in blood, to Andrea, and tells her that the Old Man is dead. She is not willing to leave with him, and instead wants to run things herself. He tells her she is no longer the woman he loved, which prompts her to attack him. Dean arrives just in time and stabs her from behind. Sam is waiting on the shore when they get off the dinghy and meets Benny. When Sam shakes Benny's hand he feels the cold flesh and reaches for his knife, but Dean shakes his head and Sam backs down. Benny then says, "I can see you two have a lot to talk about."

For this episode = 14 vampires.