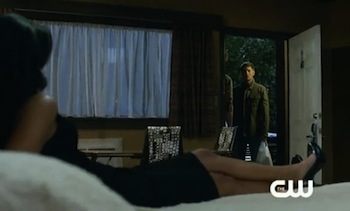 She can stay the night.
I trust you, Sammy. And with this deal, locking those sons of bitches up in the furnace once and for all, it’s too important not to. So if you say you’re good, then that’s it, I’m with you 100 percent.
—Dean to Sam
Advertisement:

Sam and Dean drive to St. Louis, Missouri, after getting a text from James Frampton, a police officer who once saved their lives during a case with a lunatic alchemist. While Dean is on a beer run, Sam hears scratching at their motel room door, and opens the door to a Doberman pinscher in a red collar. When Dean returns, Sam explains how he only wants to keep the dog overnight until they can find her owner, only to turn around and see that, instead of the Doberman, a beautiful woman with a red collar around her neck is lying on his bed. This woman is named Portia. She explains that after working the case with the Winchesters, black arts and witchcraft became the center of James' life. James became a witch and used his powers to clear cases as a homicide detective. Portia also reveals that she is James' familiar, and she was the one who sent the text. James has been suffering from horrible dreams where he murders people, who end up dying, and she believes Sam and Dean are the only ones who can help James.

For this episode = 3 humans (one of which was a witch) and 1 familiar.