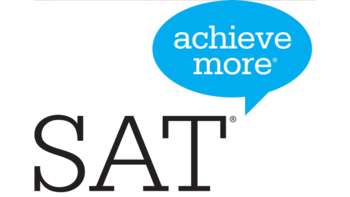 The SAT, originally known as the Scholastic Aptitude Test but now known solely by its initials, is the main standardized test used by colleges to determine the quality of applicants in The United States, covering reading and math. Generally, taking the SAT is considered a culminating moment in a teen's education and is the subject of much stress and studying. Its lesser known competitor is the ACT, which serves the same purpose but isn't necessarily the same thing. The main differences between the SAT and the ACT are:

In 2005, the SAT was heavily revamped, most notably changing from a base-1600 score to a base-2400 score. Older programs will reference the original (and now-current) scoring system. The SAT was heavily revamped again in 2016, with the first exams under the new format administered in March of that year. Scores are back to being base-1600, and the guessing penalty is a thing of the past. The writing section was made optional, and was scored on a totally different scale from the rest of the exam (0 to 24, in one-point increments). After June 2021, the writing section was completely eliminated, with one exception. The SAT has a program called SAT School Day, in which the full test is administered during a regular school day. Since a few states require the writing section to be administered as part of this program, said section is still developed for use as part of that program.

The grad school version of this is the GRE (Graduate Record Examination), though some programs also accept the MAT (Miller Analogies Test). Most professional degree programs have their own versions:

Veterinary schools used to have their own test, the VCAT (Veterinary College Admission Test), but they now require either the GRE or the MCAT, depending on the school.

The SATs as depicted in fiction frequently provide examples of: