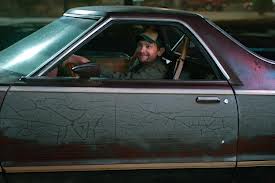 Bobby belonged to all of us.

Dean: So, guy's old lady comes home while he's working underneath his ride, put the pedal to the metal, and takes half his head off.
Sam: And, that's it?
Dean: Yeah, in a nutshell. She says she blacked out, doesn't remember a damn thing.
Sam: Well, that sounds like insanity.
Dean: Maybe.
Sam: So, how does that make this our kind of thing.
Dean: [sigh] Because, Sam, Kevin's in the wind, okay, you're sulking around like a eunuch in a whorehouse, and I can't help but ask myself, when is decapitation not my thing?

Sam and Dean, pretending to be FBI agents, find Garth, posing as a Texas Ranger in Missouri, already investigating the brutal murder of Chester Lew committed by the victim's wife, Mary Lew, despite what appears to be a happy marriage. Garth is happy to see the Winchester brothers, but can tell all is not right between Sam and Dean. The brothers are not receptive to Garth's attempts to get them to talk about their problems, and Dean in particular is upset to find that Garth has assumed a lot of Bobby Singer's duties for the hunter community. In contrast to Dean's irritation with Garth's speeches, when Garth talks to Sam he will stare off and go into a flashback to how Amelia revealed she lost her husband in the war in Afghanistan, and this drew the two of them closer.

They find green, instead of black, ectoplasm at the crime scene, but the only motive they can find for the murder is that the victim took another woman, Sara Alcott, to the prom over 30 years ago. Next, the victim's son, Scott Lew, goes to buy groceries, but instead murders a business partner, Jeff, who betrayed him. While searching Bobby's notebook they find that green ectoplasm belongs to a specter, a vengeful spirit who arises after his grave is desecrated and possesses people, causing them to be overcome with rage and bent on revenge. They find that the grave of the unknown Confederate soldier was vandalized a day before Mary Lew killed her husband, and burn the bones of the soldier.

Despite burning the bones, the murders continue when the deputy shoots the sheriff over paperwork, after the deputy had retrieved Scott Lew's inhaler from the evidence locker. By the time Garth and the Winchesters arrive at the police station, one of the officers has already left for the hospital. Garth and Sam go to the local library and find that the unknown Confederate soldier was probably a brother of a Union soldier who wore an Indian penny around his neck and had sworn to get vengeance on his brother. Dean heads to the hospital and is able to stop the officer, Carl, from killing a hospital worker who made a call in a baseball game Carl did not agree with. Unfortunately, the Indian penny is pressed into Dean's hand and he is possessed by the specter.

When Garth and Sam return to the hotel room, they find Dean possessed and with a gun pointed at Sam. Dean makes it clear that he considers Benny more of a brother then Sam and also was disappointed in Castiel. Sam manages to wrestle the gun away from Dean and Garth picks up the penny. Garth, who is free of the bitterness of most hunters, is able to destroy the penny. Garth tries to give both brothers some advice about forgiveness. While Sam and Dean listen, there is still clear tension between them at the end of the episode.

For this episode = 3 humans and one ghost.