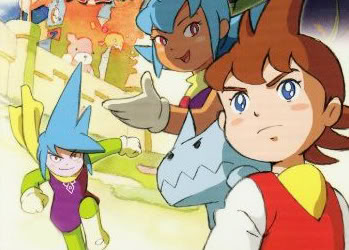 Graffiti Kingdom is a 2004 PlayStation 2 game by Taito Corporation and Garakuta Studio, with music by Yasunori Mitsuda. The game is a spiritual sequel to Magic Pengelnote The Japanese version of Magic Pengel is actually titled Graffiti Kingdom, with the US's Graffiti Kingdom being called Graffiti Kingdom 2: Battle of Devil Castle., both in that it was created by the same companies and in that they share the same major gimmick—they allow you to draw your own creatures. While Magic Pengel played it in an RPG Mons style, Graffiti Kingdom instead uses it for a Platform Game with a combat focus. Instead of sealing the creatures you create and releasing them when it's time for them to fight, your drawings become forms Pixel can take, more or less free to run, pounce, and fight through the game's stages.

Graffiti Kingdom follows the story of Prince Pixel, who, while wandering around his family's castle one day, comes across a Graffiti Wand, a tool allowing its user to bring drawings to life. In his playing around with it, he awakens its previous owner, a girl turned dog called Pastel, as well as the Devil—who may or may not be like that devil—who proceeds to unleash his minions and power upon Pixel's unsuspecting kingdom, transforming the castle and nearby lands into his own creation and taking the human inhabitants as slaves. As it turns out, the two of them were sealed inside a drawing together by Pastel herself, and since Pixel broke that seal, well, it's his job to battle the Devil, have him re-sealed, and save his parents and people with the power of the hand-me-down Graffiti Wand.

Has a character page that's currently under construction.