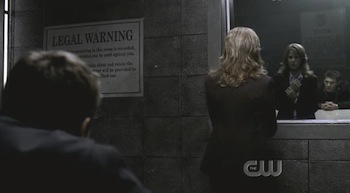 Let's pretend for the moment you're not entirely insane.

Dean: My name is Dean Winchester. I'm an Aquarius. I enjoy sunsets, long walks on the beach, and frisky women. And I did not kill anyone. But I know who did. Or rather what did. Of course, it can't be for sure, because our investigation was interrupted. But our working theory is that we're looking for some kind of vengeful spirit.

Dean is arrested for murdering the wife of a lawyer in Baltimore, Maryland, and Sam works with a detective to find the true killer.

Dean and Sam investigate the suspicious death of a lawyer, Tony Giles, who was found with a slit throat in Baltimore, Maryland. The security footage failed to capture footage of an assailant, and the brothers find the phrase "DANASHULPS" written again and again at the murder scene. When Dean goes to the victim's home, he finds the lawyer's wife, Karen Giles, dead with rope bruises around her wrists and the same phrase repeated again and again on sheets of paper in the room where she died. The police arrive as Dean is examining the body, and he is arrested for her murder.

Sam is picked up by the police as well. While talking to his lawyer, Dean realizes that the repeated phrase is not a person's name, but the name of a nearby street, Ashland. He manages to pass this information and a signal to escape to Sam in a note through their lawyer. Dean then agrees to confess and starts telling the truth about how he believes the murders were committed by a vengeful spirit. This angers the lead detective, Peter Sheridan, but his partner, Detective Diana Ballard, has reason to believe Dean when the ghost appears to her. Dean advises Detective Ballard that if she doesn't want to die like the other victims, she needs to find Sam, and tells her how.

Detective Ballard finds Sam, and is able to identify the ghost as Claire Becker, a young woman with two arrests for dealing heroin. Detective Ballard and Sam search the building where Claire disappeared and find her body. Around Claire's neck is a specially-designed necklace, which is identical to one that Detective Sheridan also gave to his partner and lover, Detective Ballard.

For this episode = 2 humans. The ghost's fate is uncertain, as we don't see her burst into flame, but Sam says she should be at rest.