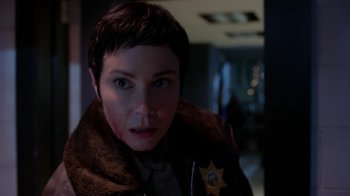 Dean I don't know, Sammy. Looks like Jody might not need our help anymore.
Sam Oh, they grow up too fast.
Written by Robert Berens.
Advertisement:

Sam and Dean help Sheriff Mills protect a girl who has escaped from a vampire nest.

For this episode: 5 vampires and 2 humans.