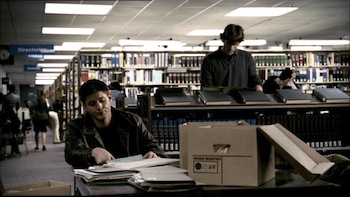 Dean: So this is how you spent four good years of your life, huh? Sam: Welcome to higher education.
Dean: I told him you were a dumbass pledge and that we were hazing you.
Sam: What about the shotgun?
Dean: I said that you were hunting ghosts, and spirits were repelled by rock salt. You know, typical Hell Week prank.

Sam: And he believed you?
Dean: Well, you look like a dumbass pledge.

A preacher's daughter in Ankeny, Iowa

is stalked by the Hook Man, a vengeful spirit connected with her father's church.

Lori Sorenson, a preacher's daughter attending Eastern Iowa University in her hometown, is in a parked car on 9 Mile Road with her date, Rich. They hear a scraping noise. When Rich gets out of the car to check it out, he ends up dead, his body hanging over the car. Sam and Dean interview Lori and note similarities with the Hook Man legend. Their research reveals that a preacher named Jacob Karns killed 13 prostitutes with his hook hand in 1862. In the meantime, Lori's roommate is killed and the phrase "Aren't you glad you didn't turn on the light?" is carved on the wall in blood.

Dean goes to the Old North Cemetery and salts and burns Karns' remains. Sam goes to find Lori, and she tells him she just found out her father is having an affair with a married woman from their church. Sam hugs her and then they kiss, but Sam pulls away and says he can't do this because people around him get hurt. Even though Dean has disposed of Karns's remains, the Hook Man appears and attacks Reverend Sorenson, but Sam shoots the Hook Man with rock salt and the spirit disappears.

Sam and Dean realize that the hook was not buried with Karns and was inherited by the church. Sam and Dean search the Sorenson home and the church for silver items, but the Hook Man reappears, attacking Sam and Lori. Sam notices Lori is wearing a silver cross necklace. When Dean throws it in the furnace, the Hook Man bursts into flame and disappears.

The Hook Man was attacking those that Lori saw as guilty of sin or immorality and attacked her when she felt guilty at the realization of her responsibility for the attacks. Despite Sam's attraction to Lori, he declines Dean's offer to stay in town a little longer.