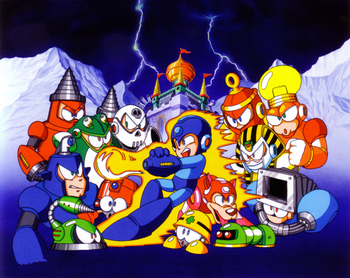 My name is Mega Man, and — Skull Man, why are you distracted by Toad Man?
The fourth game in the Mega Man (Classic) series for the NES. It was released in Japan in December of 1991, closely followed by a North American release in January of 1992. The game wasn't released in Europe and Australia until nearly a year later, in December of 1992. It has since seen numerous rereleases, including the Rockman Complete Works, Mega Man Anniversary Collection, Virtual Console, Play Station Network and Mega Man Legacy Collection.
Advertisement:

It had been about a year since the events of Mega Man 3. Dr. Wily has disappeared after the final battle, having been apparently crushed by the falling debris from his Wily Castle, and the world is at peace. But this period is short-lived (isn't it always?) when Dr. Light is contacted by a new Mad Scientist named Dr. Cossack. Tired of Dr. Light receiving all the recognition for his accomplishments while his have been ignored, Cossack intends to prove to the whole world that he is the superior roboticist by sending his own breed of Robot Masters out to conquer it. Already, eight cities have fallen behind his iron curtain, but Mega Man isn't one to stand by and let this happen, so he sets out to liberate the fallen cities from Cossack's robots.

However, once Mega Man defeats all eight Robot Masters and confronts the doctor himself in his citadel, it's revealed that Dr. Wily is still alive, and had kidnapped Dr. Cossack's daughter, Kalinka; blackmailing him into using his robots to battle his nemesis and further his own plans. Mega Man defeats Wily, who escapes, and peace is restored once more.

See also Rockman 4 Minus Infinity, a ROM hack that plays like a love letter to the Mega Man (Classic) series and Nintendo as a whole (some games in particular).