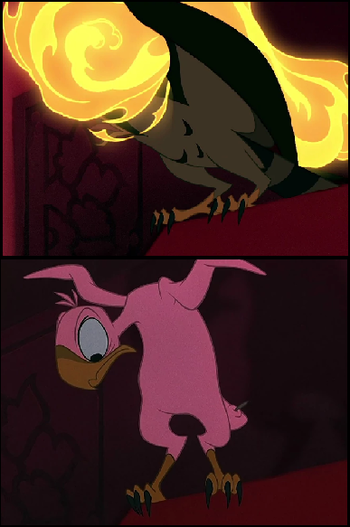 Now that's what I call Mongolian Barbecue.
A subtrope of Amusing Injuries reserved specifically for birds. When taking (lethal) damage, a bird will instantly lose all of its feathers, leaving it completely bald (and by extension unable to fly), but otherwise no worse for the wear.
Advertisement:

The featherless bird may even end up looking like a cooked chicken, though not to the same sevirity as Instant Roast since they survive.

If Fur Is Clothing is also in effect, expect the bird in question to react as if they have just been rendered naked, often resorting to Hand-or-Object Underwear. Contrast Perpetual Molt, when feathers fly, but the bird is still intact. May also come with Goofy Print Underwear if the setting is a World of Funny Animals.