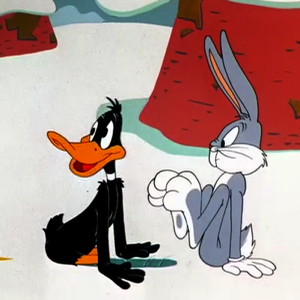 "Don't go away, Daniel Boob. I'll be back in a flash!"
"Shoot me again! I enjoy it! I love the smell of burnt feathers! And gunpowder! And cordite! I'm an elk! Shoot me! Go on, it's elk season! I'm a fiddler crab! Why don't you shoot me?! It's fiddler crab season!"
— Daffy Duck
Advertisement:

"Duck! Rabbit! Duck!" is a 1953 Merrie Melodies short directed by Chuck Jones. It is the third and final installment of the "hunting trilogy", following "Rabbit Fire" and "Rabbit Seasoning", taking place in winter.