open/close all folders
Chou-Chou and Her Seven Personalities

"I will make everything in the Seven Worlds bow down to me!"
Voiced by: Yukari Tamura (Japanese) and Kira Buckland (English)

A young girl who declared her plan to conquer the Seven Worlds, because each world has unique beautiful features. And she wants them. She has two special abilities thanks to her title of "Undisputed God" — Peon Rebirth, which forces anyone/anything that likes, loves, adores or worships her into her obedient servants; and Form Change, which transforms her to match a different personality.

"Hmhmhmm. Have you reached your limit? That's fine. Drool all you like!"
Voiced by: Natsumi Yanase (Japanese) 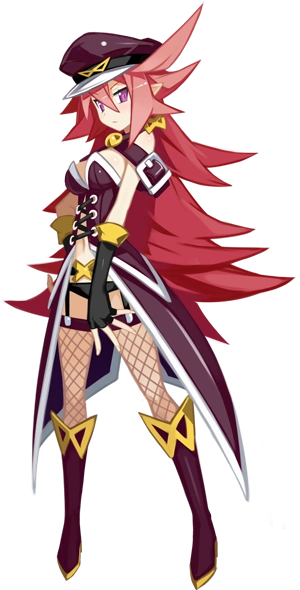 The most mature-looking of Chou-Chou's seven incarnated personalities, and the most sadistic, not to mention with a vocabulary dripping with innuendo, sometimes with a backhanded compliment or veiled insult within.

"Eep! U-um, excuse me... Please forgive me! I'll do anything you want! Anything!"
Voiced by: Aya Endo (Japanese)

Chou-Chou's shy personality, who tends to respond to any conversation made with her with a volley of apologies (and that includes the Shampurus). Often she'll jump headfirst into battle. If only to relish the pain she will invariably receive from it.

"I believe today is a good day to serve everyone some good tea."
Voiced by: Aya Endo (Japanese) 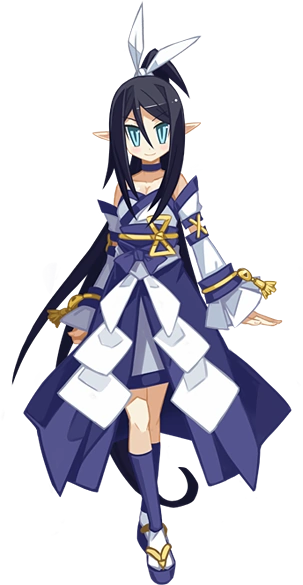 The tidy aspect of Chou-Chou, and, in her own words, the most boring, because she's everything Chou-Chou isn't normally: polite, respectfully quiet and graceful. 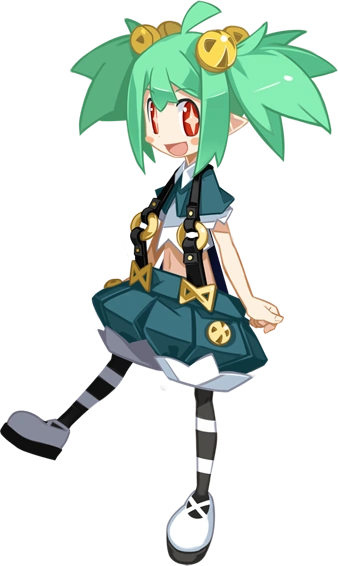 Chou-Chou's most energetic and childish persona.

"D-don't think I'm gonna be honest with you ever again!"
Voiced by: Yui Shouji (Japanese)

The side of Chou-Chou afflicted with social awkwardness.

"Gross. A little toady begging a little girl like her..."
Voiced by: Yui Shouji (Japanese) 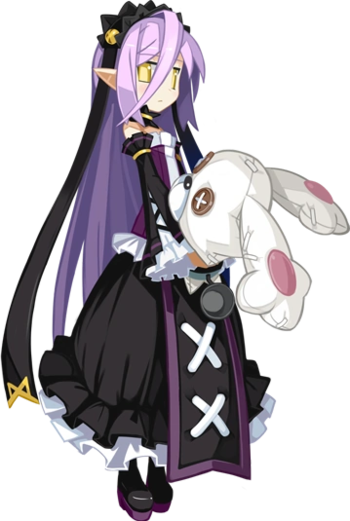 The terse, cold and quiet side of Chou-Chou, who always carries a bunny plushie with her.

"Am I being good? You should pat me on the head!"
Voiced by: Natsumi Yanase (Japanese) 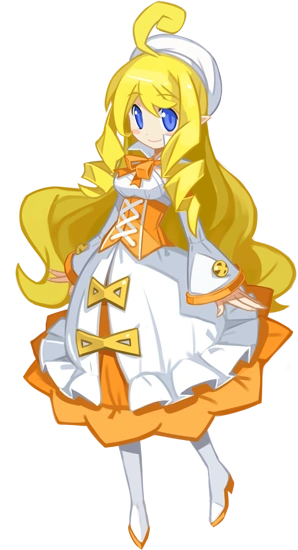 Chou-Chou's most spaced-out personality who seems to live in her own world.
Chou-Chou's Friends 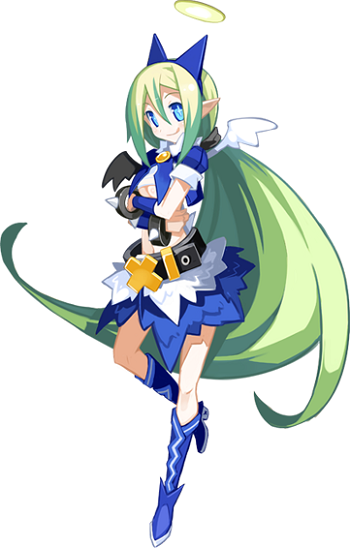 An angel who used to be a demon in a past life. Altis is so utterly clumsy that, during her life as a demon, she always ended up doing something good whenever she tried to stir up trouble, for one reason or another. Proving incapable of delivering desired amounts of evil, she was eventually reborn as an angel and booted out of the Netherworld. Not one to be discouraged by such a minor setback, she still spends her days plotting evil schemes to be reborn as a demon once more.

In Z, she reemerges as "Altalt-tistis", a masked villainess and Kakeru's archnemesis.

"Amazing! As expected of Lady Chou-Chou! I'll follow you to the edge of the universe!"
Voiced by: Hiromi Hirata (Japanese) and Johnny Yong Bosch (English)

Chou-Chou's first noteworthy vassal. He is the reincarnation of an interstellar ship, who hoped to wander the universe, but when reality fell short of his aspirations, he met Chou-Chou and instantly fell for her. Since then, he has become her loyal servant and is in charge of her ship's upkeep. He does not mind the labor, so long as he remains close to Chou-Chou.
Advertisement:
Sun World

"This is no time to fool around. I must slay the Demon Lord."
Voiced by: Junji Majima (Japanese) and Kyle Hebert (English)

The Hero of Sun World (for a certain value of "hero"), Soul is skilled in both blades and magic. He can be a bit brusque and taciturn, but it is all to keep a level head. He is completely impressed with the "Hero who is me" and usually chooses the archetypical "heroic" way of doing things. In the midst of all that, he takes a special kind of pleasure in dressing his female party members up in swimsuits and forcing them to journey with him like that. For those and other reasons, his strength is recognized worldwide, though citizens also see him as a weirdo and, as such, he is not all that popular.

"The only one who can discipline me is Madam!"
Voiced by: Harumi Sakurai (Japanese) and Sherry Lynn (English) 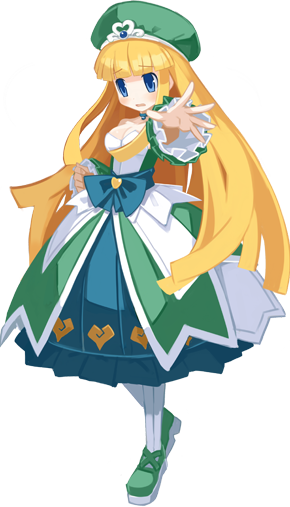 -Princess (and Demon Lord) of Sun World. Until recently, Sandy was almost like a currency exchanged between different monsters looking to kidnap a princess, but she was eventually rescued by Soul. However, she is not allowed to return to her castle and, once rescued, has been forced to travel alongside Soul. Since then, she has been ill-treated by innkeepers, paraded around in revealing swimsuits, and has generally had a rough existence. She is elegant, clean, and obedient — the paragon of a princess. However, when she comes across her "type", her personality does a total 180-degree turn.
Moon World

"This is dire... I am flat broke..."
Voiced by: Azumi Asakura (Japanese) and Julie Maddalena (English)

The Heroine of Moon World, whose regular job is a Miko. Shy and withdrawn, Tsukika does not perform many heroic deeds at all, and the residents of her world are not aware she is even their chosen one. This, together with her delicate frame, make the fact that she houses tremendous power all the more surprising. It is rumored that she can even lift small mountains. Although she secretly respects Shirogane, whenever she runs into him, she becomes flustered and nervous, which ends up with his ass being handily beaten... somehow.

"You think I can relax after hearing that she's on the move? My life is being targeted by that... that girl!"
Voiced by: Kenjiro Tsuda (Japanese) and Richard Epcar (English)

The Demon Lord of the Moon World, Shirogane is a manly and reliable father-figure for many. However, due to his title, grim appearance, and rough mannerism, those who meet him for the first time believe him to be an uptight, fussy, and all-around bad guy. However, he never performed any particularly evil deeds and wandered blithely around his world until he met Tsukika. Since then, his life changed dramatically. Now, every time he runs into her, his ass is thoroughly beaten so often he fears this otherwise lithe waif. He no longer wanders around with joy, but creeps around in fear, in an effort to avoid confrontations with Tsukika.
Fire World

"Hooray for Me! Thank you for your undying support!"
Voiced by: Manami Memakura (Japanese) and Erin Fitzgerald (English) 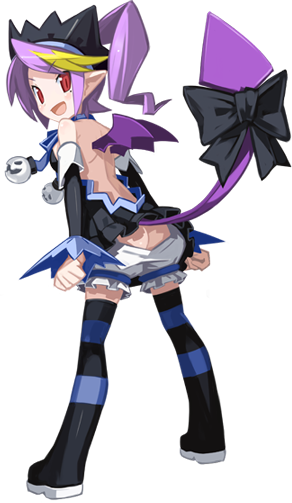 The Demon Lord of the Fire World and a famous idol. Because she is clearly craving for attention, she does her utmost to always be surrounded by adoring fans, which does not help her already low social well-being and is somewhat of a crybaby. To stand out better, she wears fashionable outfits, but she does want to wear subdued, typical outfits every once in a while. She is at the age where she is discovering who she truly is. Since her personality can be compared to Chou-Chou's, she sees her as a rival. Chou-Chou fails to think alike.

''"Let us celebrate! You have passed the prerequisites needed to earn my love. Come, let us move on to the next step!"
Voiced by: Yuuki Tai (Japanese), Matthew Mercer (English)
The Hero of Fire World isn't actually human. He's a demon. And a complete narcissist, at that. Elka is convinced that every girl swoon upon seeing his manly charm, yet is anything but manly when faced with threats, fueling rumors that he's a cowardly loser. He has been spending quite some time trying to woo Alys, mostly in vain.
Water World

"If these ruins are damaged, I might get a teensy bit upset."
Voiced by: Akiko Hasegawa (Japanese), Julie Ann Taylor (English)
The Heroine of Water World, who doesn't even care for protecting her world as much as she does for exploring a ruins buried beneath layers of ice. While a skilled mage in her own right, she tends to screw up her spells terribly.
Tree World 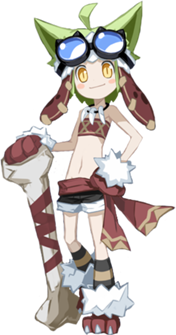 The Heroine of Tree World and younger twin sister to its Demon Lord, Sharuru. Being pretty young for a Hero, she is still a complete newbie, though she trains together with Sharuru to become stronger.

"I am the demon lord, Sharuru... Tremble before me..."
Voiced by: Yui Ogura (Japanese), Cassandra Lee Morris (English)

Demon Lord of Tree World and older twin sister to its Heroine, Welsh. As the least threatening of the Demon Lords, Sharuru tries too hard to look the part, only to end up making herself look too cute to be a threat to the world.
Advertisement:
Metal World

''"I'm the one asking questions here. Answer me!"
Voiced by: Yumi Hara (Japanese), Kimberly Brooks (English)
The Heroine of Metal World, whose brash personality matches with the dire situation of her home world.
Syrma and other characters who debut in Mugen Souls Z 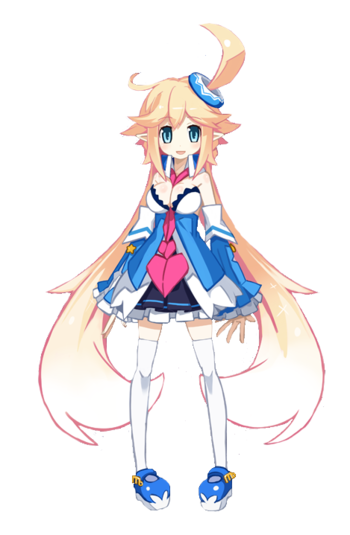 The main character of Mugen Souls Z, Syrma is another Ultimate God from Virgo World who has just recently awoken from a long slumber in time to witness Chou-Chou's rampage.

A newly-minted Hero. While searching for treasures amidst ruins, she discovers Syrma, who she then takes under her wing as her protectorate. 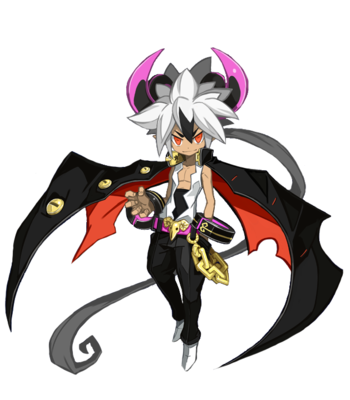 A mysterious boy who often appears out of nowhere to try to kill Syrma, believing her to be a legitimate threat to the world.

"You look really worn out! Let me guess — you got your butt kicked."
Voiced by: Ryoko Ono (Japanese), Lauren Landa (English)
The Ultimate God of Ebon (Capricorn) World. Already well-learned at a young age, she likes reading and teasing people, but is also a bit secretive. 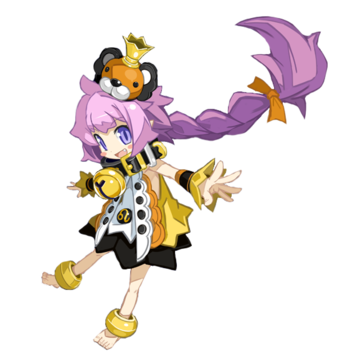 The Ultimate God of Scarlet (Leo) World, who appears to be a feral, energetic little girl.

''"I am Bertram Demetrius Bloomfield. But you may call me Bertram."
Voiced by: Kenji Hamada (Japanese), Kirk Thornton (English)

The elderly Ultimate God of Silver (Libra) World, and pretty much the most mature of his fellow Ultimate Gods.

"Common courtesy demands I introduce myself... but I have no name to give evildoers like you!"
Voiced by: Mitsuhiro Ichiki (Japanese), Bryce Papenbrook (English) 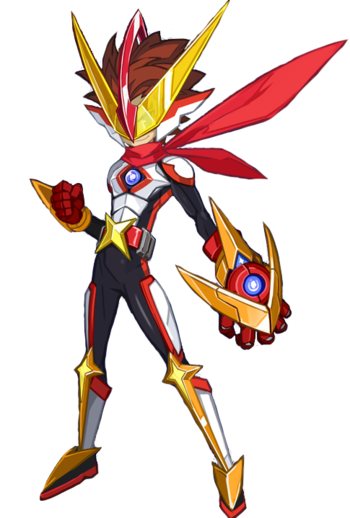 Ultimate God of Violet (Sagittarius) World who claims to being the "Ultimate Warrior".

"You shall die here. You and this man can die together!"
Voiced by: Kei Misuzawa (Japanese), Cristina Valenzuela (English)

The Ultimate God of Amethyst (Pisces) World and a bloodthirsty mermaid.

"Uwaaah! S-sorry...! I was thinking about something else..."
Voiced by: Kotori Koiwai (Japanese), Christine Marie Cabanos (English)

A mysterious girl who is often the subject of Ace's verbal tirades.