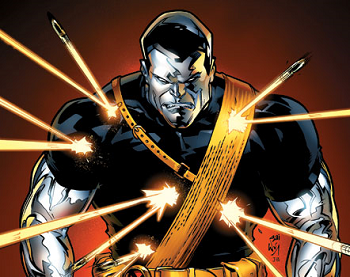 Who needs a vest, anyway?
"You might think you're the greatest earthbender in the world, but even you can't bend metal!"
— Xin Fu (about to eat his words), Avatar: The Last Airbender
Advertisement:

Some Elemental Powers let you control fire, water, air or earth. Some even let you control lightning; ice; plants; light; darkness; arcane forces, magic, or the mind; and even heart. (That is when not a victim of What Kind of Lame Power Is Heart, Anyway?) This, however, is power over metal. (Not that kind of metal; the shiny stuff.) It generally allows one to control metal, although it may even include being made of metal and using one's body to attack.

While it can be seen as a narrower version of Earth (lacking its associations with life and growth), Metal is often an Infinity +1 Element for two reasons:

See also Magnetism Manipulation. Compare Chrome Champion (a character with metallic skin), which is a common application for this kind of power, although not necessarily always a result of it. Unrelated to Fantasy Metals, though they could be powerful tools to a character with this ability. Not be confused with extra ore dining.

Having eaten the dice dice fruit, Daz Bonez is as hard as steel and any part of his body can be turned into a blade.

Having eaten the dice dice fruit, Daz Bonez is as hard as steel and any part of his body can be turned into a blade.