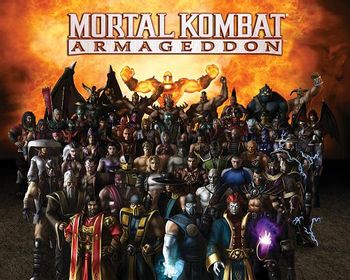 There have been many powerful warriors throughout the millennia. But ages of Mortal Kombat have begun to tear at the fabric of the realms. The critical point has finally been reached.
It was foreseen that kombatants would one day grow too powerful and too numerous. If left unchecked, their intensifying kombat would weaken and shatter the realms…and bring about…the apocalypse.
The Elder Gods demanded a safeguard be put in place to avoid total destruction. One that would make use of the kombatants’ insatiable bloodlust. Like moths to flame, they would be drawn to battle.
At the apex of destruction, alliances will be broken and old hatreds will be revived.
At last...it has come to this final battle. Armageddon...has begun.
—Opening narration

The original ''Everyone is HERE" fighting game.

Mortal Kombat: Armageddon is the seventh fighting game installment in the Mortal Kombat franchise. It was released for PlayStation 2 and Xbox in 2006, and for Nintendo Wii in 2007. This game marks the last Mortal Kombat releases for that generation of consoles.

Warriors from all realms are becoming stronger and stronger — something which was not supposed to happen. As a result, all realms are in danger. These warriors are foretold to eventually clash in a crater found in Edenia in an epic battle of such proportions, it will bring about The End of the World as We Know It. As the combatants fight, a pyramid rises from the ground without warning, and the tip bursts into flames, attracting the warriors' curiosity to see what's at the top. The combatants fight one another to get to the top, while Blaze — the firespawn that was created by the Elder Gods to destroy as many fighters as possible in order to save the realms from the prophecised Armageddon — reveals himself. The final Mortal Kombat has begun; which warrior will stand upon the rest as the mightiest warrior of all?

Armageddon brought back the entire cast from the previous six installments in the Fighting Game franchise — from Mortal Kombat all the way up to Mortal Kombat: Deception — and also added Sareena from Mortal Kombat Mythologies: Sub-Zero (because she was selectable in the Game Boy Advance-only Mortal Kombat: Tournament Edition). It includes a total cast of 63 playable named combatants, including the Trilogy exclusive characters Chameleon (for all consoles) and Khameleon (exclusively for Wii), Meat from 4 as a Secret Character, and Blaze (a Secret Character from Mortal Kombat: Deadly Alliance who was turned into a Fire Golem in order to be the game's Final Boss). To cap off the roster, all previously unplayable bosses and sub-bosses — Goro, Kintaro, Shao Kahn, Motaro, Moloch, and Onaga — were turned into playable characters without any need for unlocking them. There was even room for two new characters (Daegon and Taven, the main characters of this game). Oh, and there's an extra space for your very own created kombatant. At first, Armageddon appeared to be a dream come true: every potential Mortal Kombat dream match was now possible.

The game delivered in roster depth, stages (bringing back almost every past stage, with their own Death Traps), and customization (the 64th option on the character select allows players to create their own character) — but it lacked a solid story (characters thought to be Killed Off for Real, such as Hsu Hao, came Back from the Dead for no apparent reason), and the franchise's defining feature (the Fatalities) now required players to execute a button sequence for each part of the Fatality sequence, and they were homogenized with no unique Fatalities for individuals (instead, you're limited to ripping off a sequence of limbs). These two glaring flaws were the most criticized aspects of Armageddon.

This is the only 3D game of the series that saw no handheld port, mainly due to the size of the roster.

Armageddon is followed in the franchise itself by Mortal Kombat vs. DC Universe, but it is followed canonically by 2011's Mortal Kombat (a retelling of the first three games of the series where the story is directly affected by this game's events).