Spoilers for the original timeline before Armageddon will be unmarked

Every other character, including Blaze, can be found at their respective sheets. 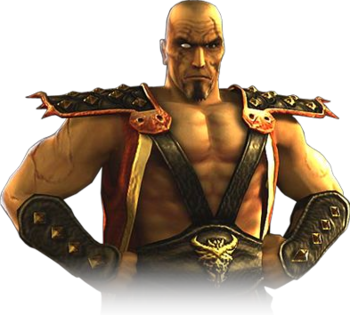 When Armageddon was foretold by the Edenian sorceress Delia, she and her husband the protector God Argus put their two sons Taven and Daegon into suspended sleep in order to fight and defeat Blaze when the time comes and prevent Armageddon. However, Blaze's capture by Onaga's holy men forced the younger broter Daegon to be woken up prematurely. Incensed by what was to become of them and the true nature of the quest, Daegon enlisted the help of Shinnok (Who manipulated the Edenian into believing that their parents favored Taven) to kill his parents. Daegon then formed the Red Dragon Clan with the intent of locating Blaze. Through the decades, Daegon used the DNA of his protector dragon Caro to create human/dragon hybrid soldiers, and took the gifts that were meant to aid both him and Taven in their quests.
When Taven eventually awoke, Red Dragon soldiers were repeatedly sent to hound him during his quest, and the two brothers eventually clashed swords prior to the Battle of Armageddon, where Daegon was soundly defeated.
Taven 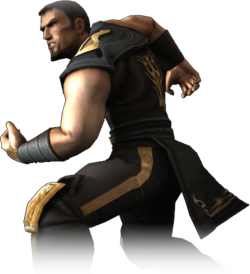 As Armageddon drew near, Blaze sounded the call to awaken the participants of the quest set forth by Delia and Argus. Taven was awoken with no knowledge of the true nature of the quest. Taven traversed Earthrealm, meeting various Kombatants and obtaining a sacred set of armor to help him on his quest. Eventually, he encountered Daegon, who was awoken before him and intended to kill him and claim the prize for himself. After traveling through Neatherrealm and Outworld in hopes of finding more answers to his quest, he went to Edenia.
After defeating Scorpion, Taven encountered Daegon again, who revealed that he killed their parents and took Taven's intended sword. Taven defeated Daegon and was then approached by Blaze, who revealed that he is the one that is meant to stop Armageddon by defeating Blaze in Mortal Kombat. Accepting the inevitable after the quest has destroyed his family, Blaze rose the pyramid of Argus from the ground and fought Blaze as the Battle of Armageddon raged below.
Advertisement:

The leader of the Tengu clan Taven encounters in his quest in Arctika. Said clan is a rival clan of the Lin Kuei.