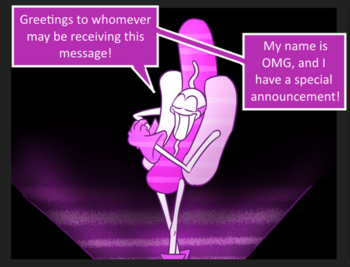 OMG's request for warriors
OMG: You can come fight for our planet! Everyone who comes to my mansion has a chance for the position. But only one or two will be allowed. So you'll have to fight one another for the honor! So come on down to my place where I'll greet you all inside! Click the button on the bottom of this droid for an instant teleportation to me! Cya real soon!

is an Original Character Tournament about a planet called Thurfromd’suhn under attack by a galactic pirate empire.

Click here for characters sheet to find out more about the contestants and judges.

Everything was normal in the world of Thurfromd’suhn , well as normal as a place where there's living candy and trees with mouths can get. But that was until Aryu Searious, the Dreaded Pirate King of Order and Conqueror of Galaxies arrived. His crusade has led him to Thurfromd’suhn, and has deemed the planet a blight upon the universe and that must be corrected immediately.

But luckily for this beautiful blue marble, Aryu is obligated to challenge the world's champion to a duel before he can properly conquer the whole planet, as stated by the Law of Conquering that Aryu wrote many years ago. And the Champion just so happens to be OMG himself. OMG, aware that he and his planet are sort of losers, has decided to find a better champion by holding a tournament to find his replacement!

Droids have been sent throughout time and space in search of the best warriors. The winner of the tournament will not only get a chance to save Thurfromd’suhn from Aryu’s Pirate Empire, but will get a mystical treasure from the world, which could be anything!!!