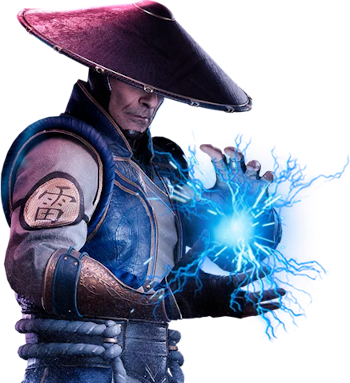 Raiden is the eternal God of Thunder and former protector of Earthrealm. Being a god, he possesses many supernatural abilities and an outlook on life radically different from that of mere mortals.

When Earthrealm was young, Raiden was its protector. With the aid of the Elder Gods, Raiden managed to defeat Shinnok, a rogue Elder God who wished to rule it, and managed to banish him in the Netherealm. Some time later, Shang Tsung invited Raiden to participate in Mortal Kombat. Aware of the threat posed by this tournament to the future of Earthrealm, Raiden took human form to compete. One year later, the Thunder God found that he had no choice but to accept Shang Tsung's offer of Mortal Kombat in Outworld. When Shao Kahn reached the Earthrealm by merging it with the Outworld, Raiden was able to protect the souls of his Choosen Warriors, but couldn't join the fight himself. Following Liu Kang's defeat of Shao Kahn, Raiden and his warriors again entered battle when Shinnok escaped the Netherealm to once more wage war against the Gods; when the Forces of Light emerged successful, he was granted the status of Elder God and turned over his position as Earthrealm's protector to Fujin.

As an Elder God, Raiden could not interfere when Shang Tsung and Quan Chi killed Liu Kang many years later. Disgusted at his peers for their refusal to intervene, he renounced his position as an Elder, gathering his warriors to stop the Deadly Alliance. This time, disaster struck the heroes. Raiden confronted the two sorcerers in front of the Soulnado chamber, but was defeated by the Alliance as Onaga, the Dragon King, entered the scene. In a desperate measure, Raiden released his godly essence, the effect of which was a single, massive explosion that apparently killed him but did not harm Onaga. While Raiden's essence soon gathered again in the Earthrealm, since his essence was corrupted because of Onaga, he had now became furious with the way Earthrealm's inhabitants had treated their own realm. He started by punishing Shujinko for his unwilling role in the Dragon King's return. His doings in Deception caught the attention of the Forces of Light; Raiden joined their ranks during the Battle of Armageddon in an attempt to secretly uncover and prevent any plans that could harm Earthrealm.

Raiden is the linchpin of the entire plot of Mortal Kombat 9. Having received visions of his future self's death at the hands of the Outworld emperor, he believes it is his duty to avert the terrible fate that awaits the realms at the end of the timeline. However the visions are unclear and do not specifically indicate what must be changed, leaving Raiden to interpret them of his own... However, Raiden does not realize the meaning of his visions until it is too late, and by then, most of Earthrealm's defenders are killed off (save for himself, Sonya and Johnny Cage). Things do not get better in Mortal Kombat X as Shinnok mounts an invasion, hoping to corrupt the Jinsei, Earthrealm's life force. Raiden manages to save Earthrealm by purifying the Jinsei, but the process corrupts him. He is now in his Dark Raiden persona, where he vows to go on the offensive to protect Earthrealm from external threats after presenting Shinnok's head to the new rulers of the Netherrealm, Liu Kang and Kitana.

Meanwhile, another Raiden is tasked by the Elder Gods to avert a Temporal Armageddon in Mortal Kombat 11 and formed an Enemy Mine with Kotal Kahn over Kronika's alliance with Shao Kahn. 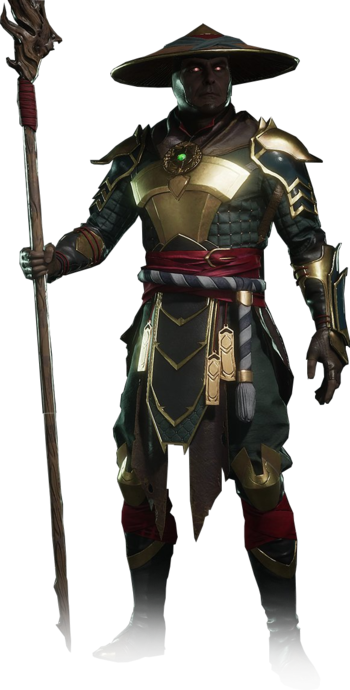 There are fates worse than death.