Spoilers for 9 will be unmarked 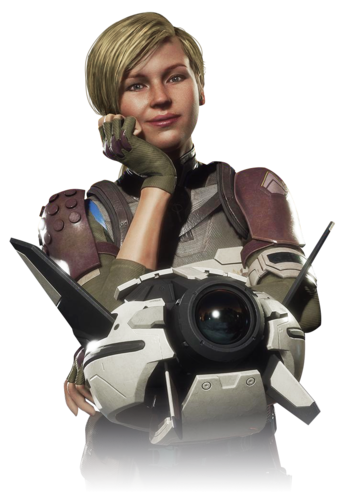 "You got Caged."
Debut game: Mortal Kombat X (Ashly Burch, English) (Gabriela Guzmán, Latin American Spanish)
Other appearances: Mortal Kombat 11 (Erica Lindbeck, English) (Christina Eenigenburg, Face Model) (Gabriela Guzmán, Latin American Spanish)
The daughter of Johnny Cage and Sonya Blade has a lot to live up to. Her parents were among the few kombatants to survive the wars against Outworld and the Netherrealm, and were instrumental to Earthrealm's victories. Cassie is as strong-willed - and occasionally hotheaded - as her mother and as quick-witted as her beloved dad, which makes her popular within her Special Forces unit.
D'Vorah 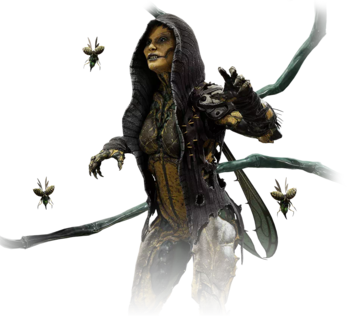 "This One cares not for Earthrealm... and worships no gods."
Debut game: Mortal Kombat X (Kelly Hu (English), Magda Giner (Latin American Spanish)
Other appearances: Mortal Kombat 11 (Kelly Hu (English), Magda Giner (Latin American Spanish)
Non-game appearances: Mortal Kombat Legends: Battle of the Realms (Emily O'Brien & Debra Wilson)
D'Vorah is of a race called the Kytinn, a species which populates the island realm of Arnyek and whose people are essentially humanoid hive bodies formed by insect colonies. The solitary nature of the Kytinn meant a common defense of their realm was impossible; thus it was conquered and merged with Outworld by Shao Kahn. D'Vorah's loyalty and insightfulness - unusual traits for a Kytinn - led to her quick political rise.
Erron Black 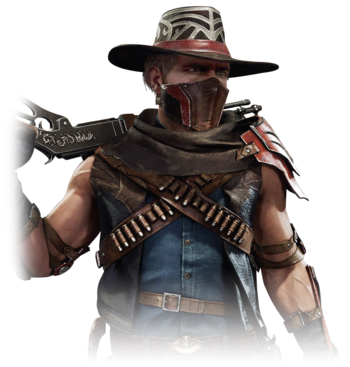 "Think you can handle me alone? You're either brave, or foolish."
Debut game: Mortal Kombat X (Troy Baker (English), Idzi Dutkiewicz (Latin American Spanish)
Other appearances: Mortal Kombat 11 (Troy Baker (English), Justin Tobias Jenkins (Face Model), Idzi Dutkiewicz (Latin American Spanish)
A wandering mercenary with incredible gunplay skills, Erron Black's exact origins are unknown. Born on Earth in Wickett, Texas, he somehow found himself in Outworld. There he spent years wandering its vast territories, selling his amazing weaponry skills to local warlords. Now in the employ of Kotal Kahn, Black shows no inclination to return to Earthrealm - or aid them in their present struggles.
"I was a bit much, wasn't I?"
Advertisement:
Ferra/Torr 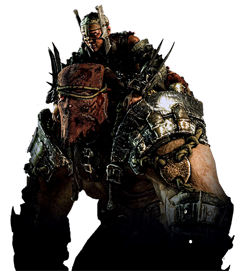 Above: Ferra. Below: Torr.
Voiced by: Tara Strong (Ferra, English), Fred Tatasciore (Torr, English), Susana Moreno (Ferra, Latin American Spanish)
The dual being known as Ferra/Torr is mysterious even to their closest allies. It's rumored that Torr and Ferra were Outworld citizens, captured and permanently tethered to each other by the evil sorcerer Shang Tsung in the bowels of his Flesh Pits. They're more likely members of a forgotten symbiotic race, in which the 'rider' bonds with a 'mount.' The rider, Ferra, serves as the de facto brains of the duo, while the hulking Torr is the muscle. It's possible they communicate with each other telepathically, or that Ferra can actually understand Torr’s booming grunts. Found roaming the Tarkatan Wastes by Kotal Kahn’s troops, Ferra/Torr were pressed into service as the emperor’s personal bodyguards. 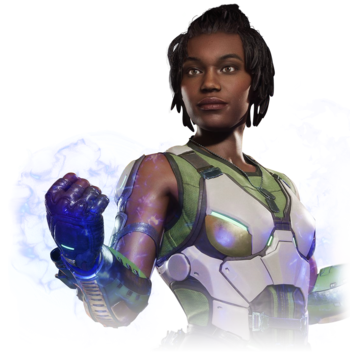 "Say my name, bitch!"
Debut game: Mortal Kombat X (Danielle Nicolet (English), Xóchitl Ugarte (Latin American Spanish)
Other appearances: Mortal Kombat 11 (Megalyn Echikunwoke (English), Christina Marie (Face Model), Xóchitl Ugarte (Latin American Spanish)
A champion kickboxer and member of the Special Forces. She is the daughter of Jax, and is close friends with Cassie Cage. Jacqui has dedicated her life to soldiering and excels at it. Unlike her best friend, Jacqui does not have her father's approval regarding her decision to join a secret Special Forces offshoot. Jacqui loves her father but yearns to help Earthrealm in its fight against hostile realms. A part of her wants revenge on those who hurt Jax.
Kotal Kahn 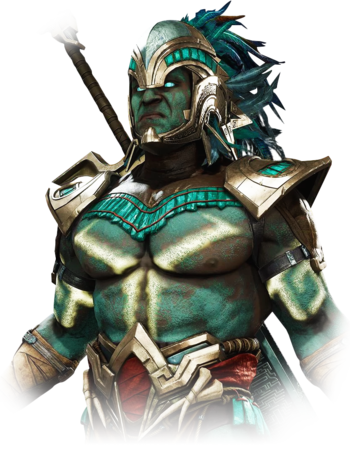 "History is written in blood, not speeches."
Debut game: Mortal Kombat X (Phil Lamarr (English), Humberto Solórzano (Latin American Spanish)
Other appearances: Mortal Kombat 11 (Phil Lamarr (English), David Hicks (Face Model), Humberto Solórzano (Latin American Spanish), Mortal Kombat (2021) (cameo)
Kotal Kahn was a young boy in the warrior realm of Osh-Tekk when it was merged with Outworld by Shao Kahn. He grew up admiring the Outworld emperor. But Kotal kept hidden from Shao Kahn a secret Osh-Tekk portal to Earthrealm. Kotal's 'magical' appearances and demonstrations of great power in Earthrealm led its inhabitants to declare him a god, whom they called Buluc. Kotal rose to General in Shao Kahn's court, but was betrayed by the Emperor and thrown into Shang Tsung's Flesh Pits to suffer endless torment.
In the new timeline, Kotal escapes his fate after Shang Tsung dies and Shao Kahn is killed in the war with Earthrealm. Kotal then served Shao Kahn’s heir Mileena, but her instability eventually led Kotal to overthrow her and assume the emperorship.
Kung Jin 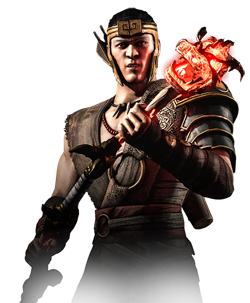 "Kotal Kahn. Under Outworld law, I claim the right of Defense... by Kombat."
Voiced by: Johnny Yong Bosch (English), Irwin Daayán (Latin American Spanish)
A descendant of the Great Kung Lao, and nephew to the current one. After the death of Kung Lao in the second Mortal Kombat tournament, the Kung family line fell on hard times, causing Jin to abandon his home and become a common highwayman. After an attempted theft of Raiden himself, to recover a family heirloom he felt Raiden didn't deserve, he was convinced to give up his ways and join the Shaolin monks. He wields a bow that comes equipped with various arrows and doubles as a staff.
Takeda 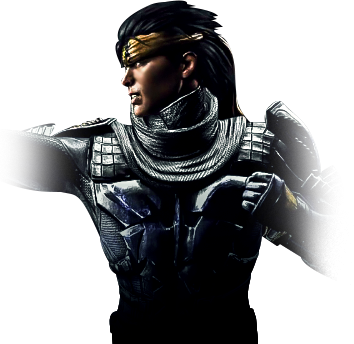 "Brave or foolish, I'm alive."
Voiced by: Parry Shen (English), Enzo Fortuny (Latin American Spanish)
The son of Kenshi and a Thai woman named Suchin. Following his mother's death at the hands of the Red Dragon, Kenshi left Takeda in the care of Scorpion and the new incarnation of the Shirai Ryu, with the child eventually growing up to be a very loyal apprentice to the hellspawn. Takeda had no contact with his father for many years, until the day he was to leave Scorpion's tutelage. Kenshi revealed that he had left Takeda with Scorpion to protect him from his mother's murderers. Despite this revelation - and subsequent reconciliation with Kenshi - Takeda has abandonment issues yet to overcome, which makes working with his father in Johnny Cage's Special Forces team a challenge at times.
Advertisement:
Triborg 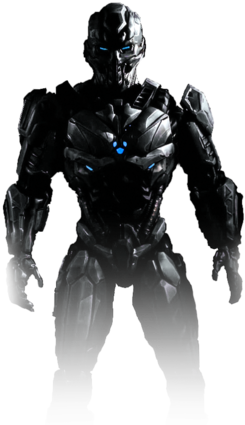 "We are the Cyber Initiative!"
Voiced by: Vic Chao (English), Gerardo Vásquez (Latin American Spanish)
A Lin Kuei cyborg that possesses the forms of Sektor, Cyrax, Cyber Smoke and Cyber Sub-Zero. Originating as part of a hidden Lin Kuei data storage housing the physical and mental data for the clan's members, a Special Forces weapons lab team recovered and uploaded the files into a test body for study. However, the storage turned out to contain an AI, which combined the files of the aforementioned Lin Kuei and proceeded to destroy the lab before vowing to kill all humans and restore the Lin Kuei. It was made available as part of the Kombat Pack 2 DLC. 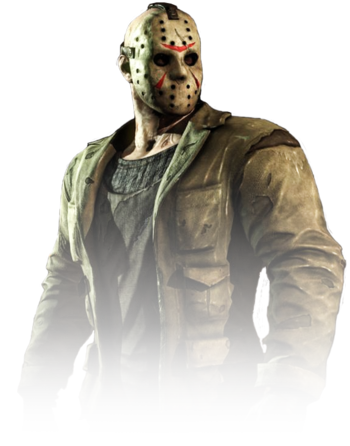 Chi-chi-chi ha-ha-ha
A Guest Fighter and the main Big Bad (later Villain Protagonist) of the Friday the 13th series, Jason Voorhees is the implacable and bloodthristy son of the late Pamela Voorhees who guards Camp Crystal Lake while killing to avenge the death of his mother. He was made available as part of the Kombat Pack.
For other tropes which apply to him, check his own character sheet. This is only for these tropes which appear in this game.
Predator 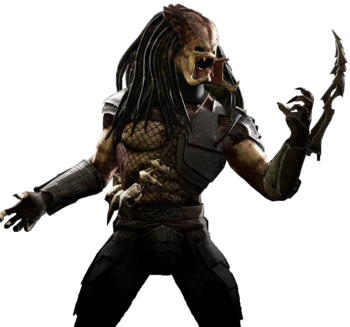 "You are one ugly motherfucker."
A Guest Fighter and the titular creature of the Predator series, the Predator is an extraterrestrial hunter that travels the universe hunting the deadliest life forms it can find. It was made available as part of the Kombat Pack.
For other tropes which apply to the species, check its own character sheet. This is only for these tropes which appear in this game.
Leatherface 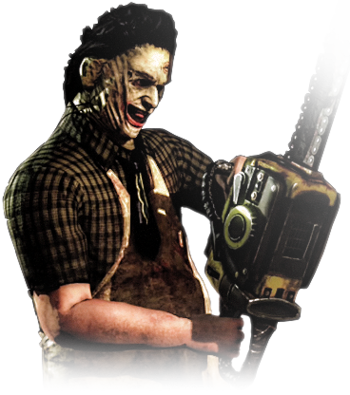 His chili's to die for.
A Guest Fighter from The Texas Chainsaw Massacre, Leatherface is a Serial Killer who butchers people to turn into meat for his family. According to his biography, his brothers kicked him out of the house until he could bring back new "meat." Stumbling across a portal, Leatherface has now begun butchering the inhabitants of various realms to serve as new Sawyer chili ingredients with Kytinn being his favorite. He was made available as part of the Kombat Pack 2 DLC.
For other tropes which apply to him, check his own character sheet. This is only for these tropes which appear in this game.
Alien 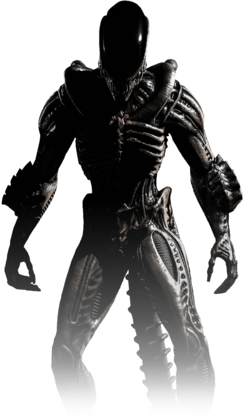 In space, no one can hear you scream.
A Guest Fighter from the aptly named Alien series, this unusual creature was born through impregnating the leader of a Tarkatan patrol after he stumbled across an egg from a hidden nest, birthing a deadly Tarkatan Xenomorph from him. Part of an ancient Xenomorph attempt to conquer Outworld that has lain dormant, the newborn Xenomorph proceeded to kill the rest of the Tarkatan patrol before seeking out potential hosts. It was made available through the second Kombat Pack.
For other tropes which apply to the species, check its own character sheet. This is only for these tropes which appear in this game.

Kenshi's lover and Takeda's mother, who died defending Takeda in Thailand during a Red Dragon assault on their house.
Forrest Fox

Similarly to Takeda, Forrest Fox is a teenager taken in by Scorpion as a member of the Shirai Ryu. The two train together for years and become close friends.
Kotal K'etz

Kotal K'etz is the father of Kotal Kahn and ruler of the Osh-Tekk realm until Shao Kahn invades and absorbs it into Outworld. He is quick to bend the knee and is granted both his life and continued possession of a portal gem, which he gives to his son in order for him to take a Rite of Passage known as the "Riftwalk" in Earthrealm. He intends to give his son his helm when he returns, but things do not go as expected. Years later, K'etz is sent by his son on a mission to kill Mileena and Reiko, where he is ambused and assassinated by Goro.
King Gorbak