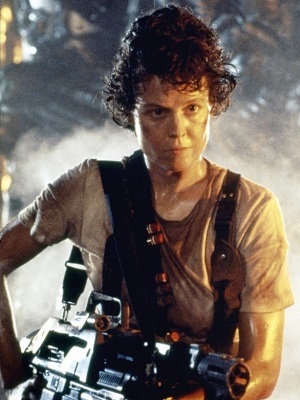 "This is Ripley, last survivor of the Nostromo, signing off."
Portrayed By: Sigourney Weaver
"Get away from her, you bitch!"

The primary protagonist and hero — in fact, is ranked #8 on AFI's "Heroes" Listnote For good reason, mind you! — Ripley is probably the most famous character in the franchise aside from the titular xenomorph. Probably the most level-headed member of the crew, demonstrating an impressive amount of bravery and taking a few levels in badass when dealing with the xenomorph. De-facto leader of the crew on the basis of being the most proactive member.

The sole human survivor of the Nostromo Incident and the only constant character in the franchise apart from the Xenomorphs, Ripley is awakened from hypersleep 57 years later. She gets suspended by the Weyland-Yutani company for "questionable judgment" regarding the ship's self-destruction, finds out her daughter died a while ago (well, in the Director's Cut...) and that LV-426, the planet where they encountered the Xenomorphs, is now colonized.

Once the colony predictably loses contact with Earth, Ripley accompanies the Badass Crew of Space Marines as a civilian adviser, and finds herself as de facto leader alongside Corporal Hicks due to unforeseen consequences. In the resulting struggle with the Xenomorphs, Ripley gains more levels in badass and becomes one of the most awesome Action Girls in cinema.

For tropes relating to the Ripley 8 clone, see the character page for Alien: Resurrection.

Portrayed By: Bolaji Badejo (Alien), Eddie Powell, Javier Botet, Percy Edwards (Alien, vocal effects), Goran D. Kleut, Carl Toop & Tom Woodruff Jr. (Alien³ to Aliens vs. Predator: Requiem)
"Let me see if I have this correct, Lieutenant. It's an eight-foot creature with acid for blood...and it arrived on your spaceship. It kills on sight and is generally unpleasant."
— Harold Andrews
Drone/Warrior 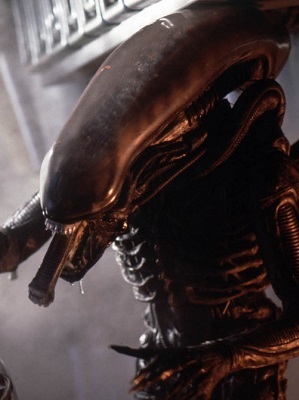 Portrayed By: Bolaji Badejo, Percy Edwards, Tom Woodruff Jr.
"You still don't understand what you're dealing with, do you? The perfect organism. Its structural perfection is matched only by its hostility."
—Ash

An adult form of Xenomorph XX121 spawned from humans, and the first and most common of said species' many forms to be encountered in the franchise.

Weyland-Yutani Corporation, AKA The Company

The collective human antagonist of the franchise. Powerful mega-conglomerate that deals in technological advances and facilitating the human colonization of space. Concerns itself with obtaining samples of the Xenomorph for their Bio-Weapons Division in the hopes of finding a profitable use, often with repeated schemes that involve intentionally causing Xenomorph infestations at the risk of human populations.

The creators of humankind and several other species throughout the cosmos. Worshipped as gods by many, the Engineers are a hyper-advanced, space-faring race believed to be billions of years old. For reasons unknown, they now seek to commit genocide against humans as a whole using the virulent Chemical A0-3959X. 91 – 15, which they also used to seed life on barren worlds. Some speculate that they are responsible for creating the Xenomorphs for use in biological warfare, although the jury’s still out on that one.