Spoilers for 9 and X will be unmarked

For Kronika, see her own page. 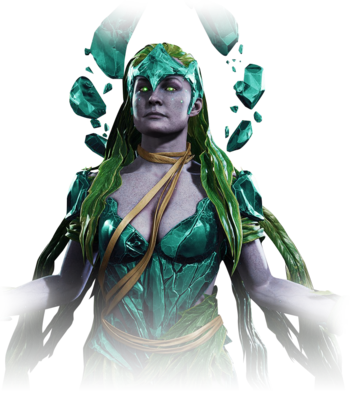 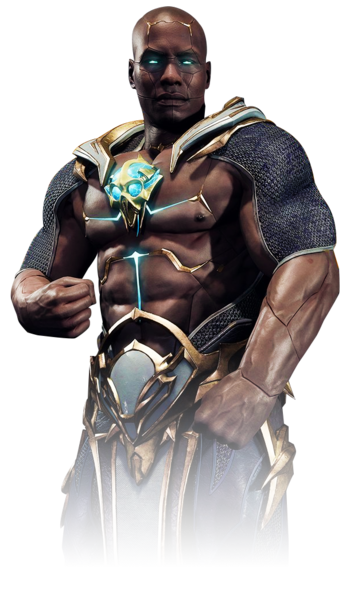 "I am timeless."
Voiced by: Dave B. Mitchell (English), Esteban Desco (Latin American Spanish)
Face Model: Brandon Green
A loyal underling of Kronika, intent on carrying out her will to "correct" the flow of time.
Kollector 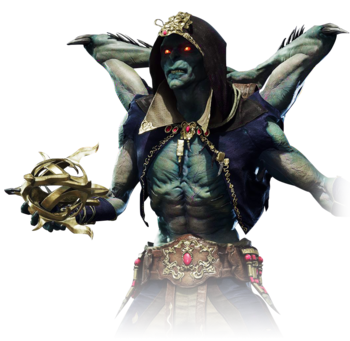 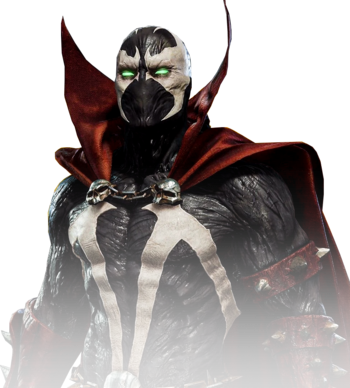 "You don't have a chance in Hell."
Voiced by: Keith David (English), Víctor Hugo Aguilar (Latin American Spanish), Philippe Dumond (French)
Todd McFarlane's iconic Anti-Hero creation. After being betrayed and murdered by his own government, Al Simmons was condemned to Hell for the wet work he performed as a CIA assassin. A demon king known as Malebolgia, however, had other plans: he offered Simmons a chance to reunite with his wife in exchange for his immortal soul. Thus, Simmons was reborn as an undead Hellspawn, or simply "Spawn". He was granted supenatural powers to fight petty criminals and lower demons, but Malebolgia's intent was to train him to serve in Hell's army.
For other tropes which apply to him, check his own character sheet. This is only for these tropes which appear in this game.
The Terminator 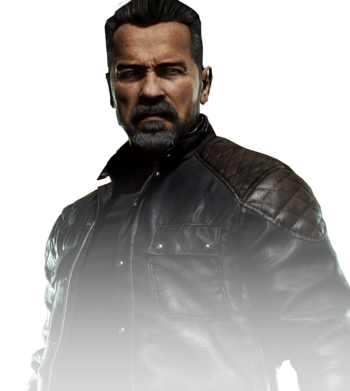 "You will be terminated."
Voiced by: Chris Cox (English), Blas García (Latin American Spanish), Daniel Beretta (European French)
Face Model: Arnold Schwarzenegger
In one possible future, Earthrealm has been conquered by Skynet - a rogue artificial intelligence - after it had eradicated nearly half of the human race. The survivors of Judgment Day, under the leadership of John Connor, rebelled against Skynet and its army of machines to retake the planet. In response, Skynet created a line of robots known as Terminators to infiltrate the human resistance and to terminate its key members. The T-800 series are the latest models of Terminators: they are coated with living flesh and can pass as completely human. Two of these models were sent back in time with important missions: one is to terminate Sarah Connor - John's mother - before he could be born, while another was reprogrammed to protect John himself from an upgraded model, the T-1000, when John was 10 years old. After the fall of Skynet, a third model lived a secluded life with no other purpose, before allying with Sarah and a cyborg named Grace years later to defeat a wholly new threat, the Rev-9, and protect its target: a woman named Dani Ramos. The model that appears in the game has different lines regarding his allegiance and mission as to whether he is sent by the Resistance or Skynetnote occasionally replaced with Legion in dialogue to protect or terminate someone in the Mortal Kombat realms.
For other tropes which apply to him, check his own character page. This is only for these tropes which appear in this game.
RoboCop 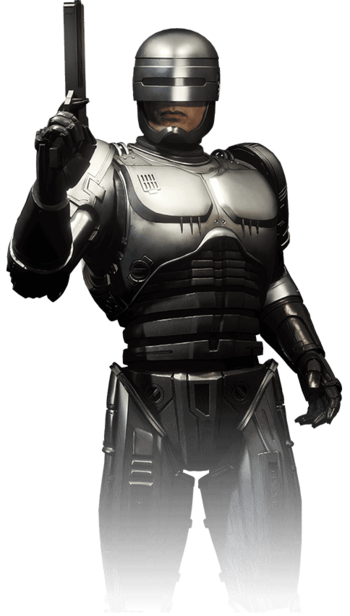 "You are under arrest, dirtbag."
Portrayed by: Peter Weller (English), Dafnis Fernández (Latin American Spanish)
Alex Murphy was once a patrolman in a blighted part of future Detroit. He was fatally wounded in the line of duty by Clarence Boddicker, a notorious cop-killer. After being pronounced dead, his body was claimed by OmniConsumer Products (OCP), who placed most of his organic components into a robotic shell. "RoboCop" was pitched to the city as a replacement for the over-burdened and under-manned police; "the future of law enforcement." Murphy found himself in the Mortal Kombat universe while in pursuit of Kano, whom he caught selling weapons to Old Detroit's gangs. With his body receiving a few upgrades, RoboCop is ready to protect and serve the people of this new universe and punish anyone who disturbs the peace.
For other tropes which apply to him, check his own character page. This is only for these tropes which appear in this game.
John Rambo 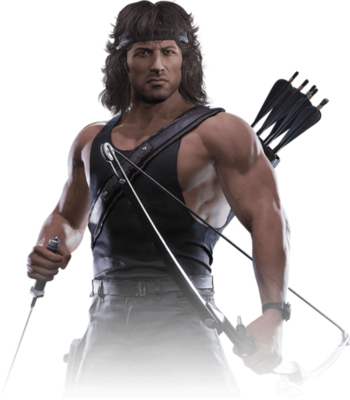 "I'm your worst nightmare."
Portrayed by: Sylvester Stallone (English), Víctor Hugo Aguilar (Latin American Spanish)
John Rambo is a Vietnam War veteran and a highly skilled Green Beret. After returning to the US, Rambo suffers from Post-Traumatic Stress Disorder from the war as well as discrimination from the civilians. Any hopes of gaining a peaceful life prove difficult for Rambo - and he is eventually pulled back into battle, getting involved in many conflicts around the world. Rambo is an expert in guerilla warfare, capable of tracking, ambushing his enemies, setting up traps and able to wield any kind of weapon with deadly precision.
For other tropes which apply to him, check his own character page. This is only for these tropes which appear in this game.

Kharon
Voiced by: Sean Chiplock (English), Beto Castillo (Latin American Spanish)
The ferryman of the Netherrealm, tasked with taking damned souls across the Sea of Blood aboard his fleet of ships.
Descendant of Apep
The Krypt's player character. A masked stranger who journeys to Shang Tsung's island to look for treasure.