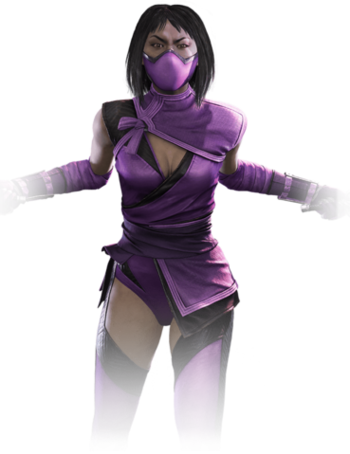 Mileena is a clone of Kitana, created by Shang Tsung's sorcery for Shao Kahn, using Tarkatan physiology. Vicious and evil, she despises Kitana, and feels that it is her own right to rule Edenia as Princess in her place.

The Emperor feared if Kitana should ever discover the truth about her past, she'd turn against him. Kahn then ordered his sorcerer Shang Tsung to create an evil, vicious, and loyal clone of Kitana who would take her place. Tsung combined Kitana's essence with a Tarkatan's to achieve this purpose. However, something went wrong and the clone's face deformed into a hideous Tarkatan's mouth. Rather than disposing of her, she was given the name Mileena and introduced as Kitana's twin sister. During Mortal Kombat II, Shao Kahn began to grow suspicious of Kitana and Mileena was ordered to watch over her sister. After finding out that Kitana was indeed conspiring with the Earthrealm warriors, Mileena attacked the princess, but Kitana proved to be the superior fighter and killed her. Damned to the Netherealm, Mileena found herself recruited by the fallen Elder God Shinnok. She served the rogue deity as a spy during Mortal Kombat Trilogy, and then assisted in Shinnok's invasion of Edenia during Mortal Kombat Gold. After Shinnok's defeat, she was again bested by Kitana and secretly locked away in an Edenian prison, perhaps in the hope that she would one day reform.

When the Dragon King, Onaga, returned during Mortal Kombat: Deception and began his own invasion of Edenia, Mileena was freed from her prison by former ally (and possible lover) Baraka. She joined Onaga, and was ordered to pose as Kitana in order to mislead the princess' armies. However, as Mileena began her deception, she also began to consider taking control of the armies for herself. After the fall of Onaga, she used those armies to take over Shao Kahn's fortress during the period before Armageddon, only to surrender it back to Kahn when the former Emperor returned and faced her.

Mileena has a slight upgrade to her story in Mortal Kombat 9 as, rather than a clone raised alongside Kitana since childhood, she is a fully-grown woman who was cloned shortly before the events of the story and gains consciousness during the events of the Outworld tournament. The discovery of this information plays a very large role in Kitana's decision to defect from Outworld while Mileena continues to faithfully serve the emperor as a personal assassin. However, it's the aftermath of said storyline that sees huge changes in her character's direction: With Shao Kahn gone, she becomes the Empress of Outworld. Until Kotal Kahn drives her and her forces underground, that is. She then embarks in a civil war against him, with its toll being taken on Outworld's stability. Ultimately, the coup fails and she is killed by D'Vorah.

After being mentioned many times in several intro dialogues in Mortal Kombat 11 and making a cameo appearance in Kitana's Friendship in the Aftermath expansion, Mileena finally returns as a DLC character for Kombat Pack 2, as part of the game's Ultimate expansion.