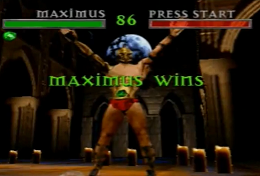 "I Can't Believe It's Not Mortal Kombat 4 "
"Be careful what you pray for."
— Tagline
Advertisement:

For the book series, see The War Gods. For the trope, see War God. For the unrelated, yet successful Sony franchise, see God of War.

In 1996, Midway Games was working on Mortal Kombat 4. Its development required Midway to create an arcade system for it — which was codenamed Zeus — but the company wanted a way to test their new hardware to ensure it could do the Mortal Kombat name justice. Their "test" was War Gods.

In the distant past, a spaceship carrying a powerful ore with the power to create life crash lands on Earth. Chunks of the Ore are scattered across the planet; over the course of human history, ten mortals find pieces of the Ore, which transforms each of them into immortal warriors. The ten have now gathered to fight over each other's pieces of the Ore.

The game's cast is comprised of:

War Gods is basically a 3D Mortal Kombat 3 clone — complete with Fatalities — which replaced the Run button with a 3D button (allowing characters to move along the Z-axis). War Gods also suffered from bad character design and annoyingly cheap AI; the home conversions of the game fare marginally better, as Midway tried its best to fix the AI. The game's developers learned from their mistakes with this game and made sure to avoid them while developing Mortal Kombat 4.

Troper, you are chosen!

"It's useless to fight me!"
Exor