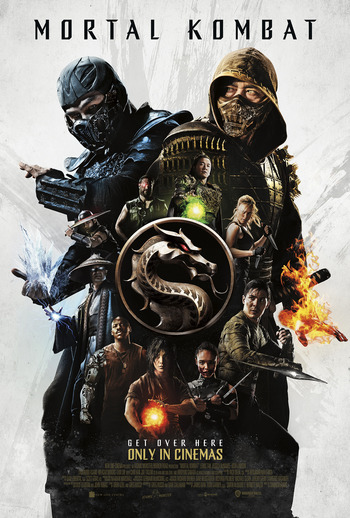 ROUND TWO... FIGHT!
"Throughout history, different cultures all over the world reference a great tournament of champions. That dragon marking, I think it’s an invitation to fight for something known as Mortal Kombat."
— Sonya Blade
Advertisement:

Mortal Kombat is a 2021 American Supernatural Martial Arts action film. It is the directorial debut of Simon McQuoid, was written by Greg Russo and Dave Callaham, and was co-produced by James Wan. It is based on the video game franchise of the same name, also serving as a Continuity Reboot to the film series that started with Mortal Kombat: The Movie.

The story concerns a washed-up mixed martial arts fighter named Cole Young, unaware of his hidden lineage or why he is being hunted down by Sub-Zero of the Lin-Kuei clan of assassins. He's saved in the nick of time by a man named Jax, who points him to a woman named Sonya, who reveals that he's part of a group of fighters chosen to defend Earthrealm in a high-stakes battle against the forces of Outworld.

The film was released on April 23, 2021 both in theaters and on HBO Max (the latter available through May 23). In 2022, a sequel was confirmed to be in development.