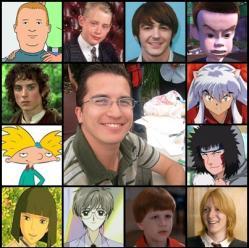 Enzo Fortuny (in the middle) and some of his roles
"¡Garras de Acero!" Explanation  Lit. "Steel Claws!", the translation given in the LatAm dub for Inuyasha's Iron Reaver Soul Stealer/Sankon Tessō attack"
Advertisement:

Enzo Favio Fortuny Romero (born June 7, 1981), better known as Enzo Fortuny, is a Mexican voice actor and director. Most of his roles set him to young kids or teenagers, although with very different personalities, making him very hard to typecast despite his voice being one of the most known in Latin America. He's the regular voice of Drake Bell in Latin America