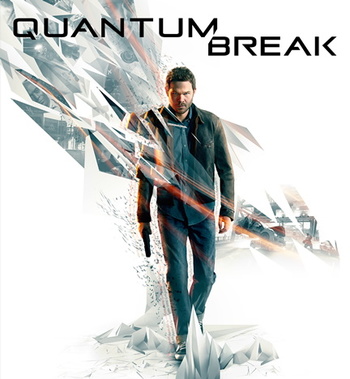 Time is Power
The time is out of joint. O cursèd spite,
That ever I was born to set it right!
—Hamlet, Act 1, Scene 5
Advertisement:

Quantum Break is a game developed by Remedy Entertainment, released April 5th, 2016. Opening at Riverport University, Jack Joyce (Shawn Ashmore) helps his buddy Paul Serene (Aidan Gillen) with a demonstration in the labs, only to discover he's built a time machine. Turning it on, Jack's brother Will Joyce appears as it starts to malfunction, warning that they're going to break time. Despite rushing to the controls, Will is too late to stop the machine going haywire, dousing both Jack and Paul in chronon radiation and giving them time travel superpowers. Unable to free Paul from the machine, Jack and Will flee as Monarch Solutions agents open fire on them, forcing Paul to jump into the future.

Escaping into the university, Jack and Will discover that time is randomly stuttering due to a fracture in it, and will only get worse unless Will can fix it. In an attempt to escape, the duo meets the mastermind of Monarch Solutions: it's an older, jaded Paul Serene. Escaping in the first act, Paul explains he jumped too far forwards, finding himself after the end of time. Explaining that events cannot be changed as it just causes it anyway, Paul warns Jack not to interfere with his plans. And then things start getting confusing.

Quantum Break is especially unique in that not only do players control Jack Joyce, but the end of each act has them control villain Paul Serene, using his precognition ability to somewhat predict the future and make certain choices to impact the plot. This is then compounded with "TV drama"-type episodes playing between acts, which show things from the perspective of Serene and secondary characters tied to Monarch. As such, be wary of spoilers for either.

The tropes on this page are like an egg...

open/close all folders
A-M
N-Z
If the tropes are like an egg, then that egg is fucking broken! The trope egg is fucked!