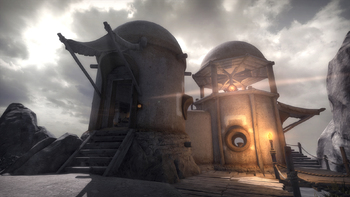 Quern - Undying Thoughts is an Adventure Game developed by the British studio Zadbox Entertainment. It was funded

The game concerns an unnamed protagonist who becomes trapped on an island after falling out of a gateway. A letter from Professor William Maythorn explains that he has brought you, the player character, to the island of Quern in order to help him with an "essential matter". As the player progresses through the game, they must decide whether to trust Maythorn or think for themselves.

The game was generally well-received by critics and players, with many noting similarities between the game and the Myst series.