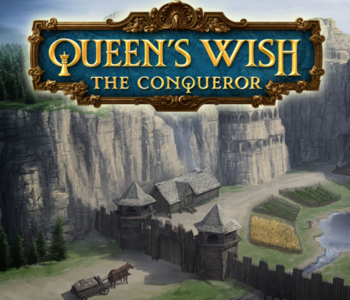 Queen's Wish is the newest series from the veteran creator Jeff Vogel, who has been making Western RPG games with Turn-Based Combat for 25 years as Spiderweb Software, often completely on his own. The first instalment, Queen's Wish: The Conqueror, was funded

on Kickstarter on June 29th, 2018, and released on PC through Steam on September 11th, 2019. It sold well (for his standards), so a sequel to it is already all-but-certain.
Advertisement:

In The Conqueror, you play as the youngest son/daughter of Queen Sharyn III, a Prince(ss) who is universally regarded as a spoiled brat and a failure. However, you are finally given a chance to prove yourself by being sent to Sacramentum - an island that once belonged the Queen's empire, but fell away long ago, and is now torn between its own warring factions. You are thus given a go at bringing this wayward, but relatively unimportant place back into the Empire's fold with relative restraint. Fail, and a ship full of veterans is waiting, and ready to go scorched earth.